WELDON – Two Venezuelan men who have been sought statewide for installing card skimmers were arrested Thursday after an anonymous caller reported suspicious activity at a Weldon ATM where a device had been installed late last year.

A coordinated operation following the tip led to the arrests of Johan Carlos Gomez Castillo, 29, and Hender Pena Aquilar, 35, according to Weldon police Chief James Avens.

The men, who have temporary Florida drivers license, were caught after getting on Interstate 95 by Trooper J.D. Warren of the state Highway Patrol and Weldon Officer Quinton Godley approximately two hours after the anonymous call was received around 9:15 a.m. Thursday. 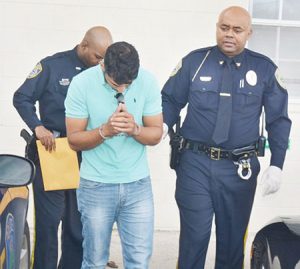 One of the two suspects allegedly involved in placing a card skimmer at an ATM near I-95 is escorted to jail by officers with the Weldon Police Department. | Photo by Lance Martin

The financial institution which maintains the ATM off Julian R. Allsbrook Highway at the old Interstate Inn confirmed another skimmer had been placed there Thursday morning.

The financial institution, Avens said, also confirmed the men have been suspected of placing skimmers in ATMs across the state. The United States Secret Service has also been investigating, the chief said.

Aquilar, who was waiting to be interviewed, told rrspin.com “no English” in response to a series of questions on the matter.

Avens said there was no evidence any ATM users who used the machine in Weldon were victimized by the device installed in November or the one installed Thursday morning.

Enfield police Chief Tyree Davis said there was a victim there. The bank paid restitution to the victim and the police department plans to charge the pair, the chief confirmed later on Thursday.

“I think it’s a great job by the Weldon Police Department and the team which executed the traffic stop,” Davis said. “Weldon and Enfield have been working together to locate and identify them.”

Avens said he was pleased with the effort, which led to the arrests of the two men.

“We’ve been in contact with the financial institution to let them know they’re in custody and we thank the Roanoke Rapids Police Department, Halifax County Sheriff’s Office, Highway Patrol and my officers,” Avens stated.

The anonymous call was a key in the effort, Avens said. “Thank you, a big thank you to the concerned citizen,” he said. “I believe when you see something, say something,” he stressed.

Whether this becomes a federal case will take more investigation, Avens said.

“There’ll be a lot of agencies jumping on. I feel if all the other agencies get involved who knows what it might lead to,” he concluded.

Several races have developed as filing for the May Primary continues across the Roanoke-Chowan area. A three man race has... read more