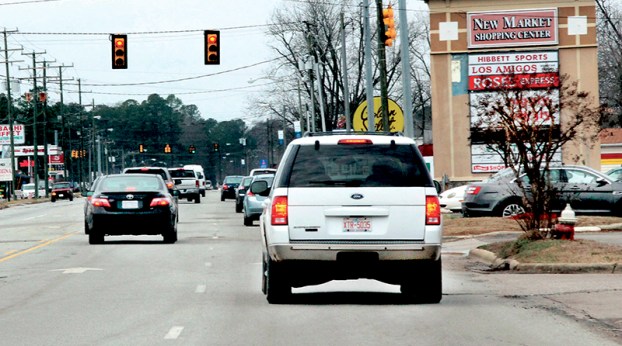 AHOSKIE – One of the NC Department of Transportation’s (NCDOT) much-anticipated infrastructure improvement projects will begin in the town of Ahoskie in the coming weeks.

At the Ahoskie Town Council meeting held Feb. 13, Town Manager Kerry McDuffie briefed Council on the upcoming road paving of one of the town’s main thoroughfares snaking through the heart of Ahoskie’s business community: US-13 (Memorial Drive).

“To give the Board an update, “McDuffie began, “(Town Maintenance Supervisor) Steve (Lassiter) and I will be attending a pre-construction meeting with DOT about the paving; and that project is supposed to start around March 15 and be completed by May 31,” McDuffie informed Council. “Afterward we’ll meet with DOT to find out some other details on other road projects.”

Councilman Charles Reynolds asked if the project included the North Carolina and Virginia Railroad bridge overpass section of Memorial drive that divides East from West – from Martin Luther King Drive to Academy St. McDuffie answered him that it did not.

Reynolds also wanted to know about other paving projects, particularly ones in his Ward B district, but McDuffie said more would be known after he attended the pre-construction meeting about Memorial Drive on Wednesday.

Following the Feb. 14 pre-construction meeting, McDuffie said the paving would be from roughly the Ahoskie Wal-Mart on US 13 South and extend north and west to Central Ford’s location at Memorial and Peachtree.

“They’re also going to pave NC 561 past Enviva where it intersects with Memorial (US-13), but I don’t know how far down that construction will extend,” McDuffie said. “I was only involved with the portion that will be going on in the town. I do know other projects are planned (for roads) around the county.”

The improvement project will include milling of the roadway as well as paving according to NCDOT District Field Engineer Scott Emory, who also spoke with the News-Herald following the meeting.

“The project is under one contract, but there are three routes involved, of which Memorial Drive is just one,” Emory said.

The cost will be with DOT funds, which are approximately 80 percent state revenues and 20 percent federal. Approximately 50 percent of state transportation funding is based on revenues from the Motor Fuel Tax; 30 percent comes from driver and vehicles fees collected by the North Carolina Division of Motor Vehicles; and 20 percent is from the Highway Use Tax on vehicle title transfers.

Appropriated by Congress, federal transportation funding comes from a federal motor fuel tax and vehicle fees (mostly on trucks). Federal funding accounts for approximately 25 percent of NCDOT’s overall budget and about 45 percent of its construction budget.

“Barnhill Contracting out of Elizabeth City will be the paving contractor,” according to Emory.

The District Engineer also wanted to be clear on the dates in which motorists would be inconvenienced when construction is taking place.

“The way it works is that we have a seasonal limitation on re-surfacing,” Emory explained. “So, basically they won’t be replacing any asphalt before March 15. What they’re looking at doing is starting the milling process around March 12; and they have three road projects to complete by May 1. They don’t know which one to start on as yet. They may do the section right by Powellsville first and then come to Ahoskie; right now they couldn’t tell us which one they were going to start on first.”

Emory said as of right now, it was unclear which of the paving projects would begin first.

The other road projects include a section of Bethlehem Church Road in the Powellsville community northward to NC 561 to Harrellsville, as well as also in Bertie County US-13 south toward Beuna Vista.

“They’re looking at two-to-three weeks to having it all done,” he said.

Emory said an estimate for the Ahoskie paving work would take approximately a week’s time – naturally, that’s with no foreseen delays.

McDuffie said in his meeting with DOT, the group met with the contractors for an explanation of what would be done, and for a review of the contract.

“People are going to always be interested in things that interrupt the traffic flow,” he reasoned.

JACKSON – Northampton County Public Schools are joining with 10 other educational districts to receive an unexpected windfall of cash.... read more