He was born on December 16, 1950 to William and Dorothy Lovegrove of Rich Square, NC.

He was married to Shirley Early in 1980 and to this marriage was born two children. Spencer worked as a Warehouse Manager for 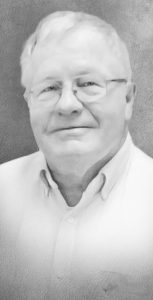 Roanoke Chowan Electric Co-op for over thirty years until retiring. He was a very active member of the Sandy Run Baptist Church, serving as a deacon, a youth leader, a Sunday school teacher and served many committees. He was a Mason. He was also a volunteer fireman for the Roxobel Fire Department.

Spencer loved his church and his community often helping people in need. He had a great number of friends who will miss him tremendously.

Memorial contributions may be made directly to the Sandy Run Baptist Church, PO Box 157, Roxobel, NC 27872 or online by visiting www.tmcfunding.com/search, then type Spencer Lovegrove

Garrett-Sykes Funeral Service of Rich Square handled the arrangements for the Lovegrove family and online condolences may be directed to the family by visiting www.garrettsykesfs.com.