AHOSKIE – You can say ‘there’s no place like home’, but they could have completed this sweep anywhere.

Ridgecroft School claimed three of the four tournament championships here Saturday as the Tarheel Independent Conference put the capper on their high school basketball season with a quartet of title games on the Rams’ home floor.

First of all was the girls’ junior varsity title tilt, pitting the Rams against rival Northeast Academy. Both teams finished tied for the regular season crown, but NEA – the defending tournament champs – claimed the top seed. Riding the play of Emalee Jones, Northeast jumped out to a 13-8 lead after the first quarter. But the Lady Eagles suffered scoring woes in the second period, scoring just one point. Ridgecroft’s nine points allowed the little Lady Rams to take a 17-14 halftime lead.

Northeast trimmed it down to a four-point game after winning the third quarter battle 11-to-10, and trailed 28-24 entering the final six minutes. But Camryn Joyner, Mandy Spence and Gracie Boswell kept the Eagles off balance, and the Rams 12-4 fourth quarter allowed them to take the day’s first title with a 40-28 junior varsity girls triumph.

After Pungo Christian pulled off a small upset of Northeast on Friday night to make the final, the little Raiders from Belhaven headed to a showdown with Ridgecroft, who’d breezed to the championship match-up with an easy win over Terra Ceia Christian.

In the boy’s jayvee title game, Ridgecroft was off and running with a 16-to-1 first quarter. Pungo didn’t score their first field goal until there was 1:18 left on the first half clock; still, the Raiders kept pace in the quarter though the Rams won it, 12-10, leaving Pungo in a 28-11 halftime hole. 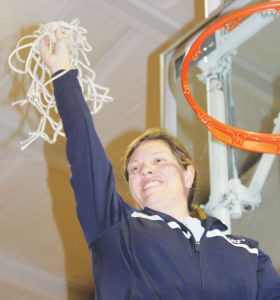 Ridgecroft’s Susan Oliver, who coaches both the varsity and jayvee girls teams, waves the twine triumphant after cutting down the nets on another championship.

With David Basnight hitting short jump shots and Bryce Stevens and Wyatt Daly scoring in the paint and on fast breaks, Ridgecroft again had a high-scoring quarter with 15 points. Pungo suffered another scoring drought thanks to Ram defense and poor Raider shooting in the period as they only managed three points to the Rams’ 15. The fourth quarter was bench-clearing time for Coach Jeremy Brittenham as all Rams players got a chance to play. All but two players scored as the Rams won it 49-23 for their second title of the day.

The largest crowd of the day came to witness the varsity girl’s showdown between regular-season champ Pungo and the host Lady Rams, with Pungo as the top-seed. The Lady Raiders had also won the two previous meetings between the pair on this floor: first, in the Nick Brantley championship, and again during the regular season. Ridgecroft had confidence, as they won in Belhaven one weekend earlier in a blowout, 51-29.

As with the first two games, this one was a nail-biter down to the end. It began with the Lady Rams opening to a 9-0 lead before Pungo could get on the board, as they were whistled for five early fouls. But Emily Spencer led a Raider comeback, and her lay-up tied it at 11-11 with 3:22 remaining in the first quarter. Two more ties found it knotted at 15-15 until Brooke Rose broke the stalemate with a late jumper and a 17-15 Rams lead.

Brooke Rose hit a three-pointer to open up a five-point Ridgecroft lead in the second quarter, but Pungo got two scores and a free throw from Emma Allen to tie it at 20-all. Back came Rose with another triple, but Pungo scored six of the final eight in the half and led by a point – 26-25 – as the teams went in at halftime.

Ridgecroft attacked the middle opening the third quarter, with Pungo in foul trouble up front, and it paid off with a 31-26 lead. Allen cut the lead to three and after Reagan King scored, Rose hit her fourth and final triple of the game. The 36-28 lead had the Raiders scrambling, but they managed to cut the deficit to four and later three with time winding down.

Trailing by three, 37-34, the Raiders tried to make it up with three-point attempts. However, Ridgecroft won the rebounding battle and more Pungo fouls sent the Rams to the charity line where they would eventually make nine of their final sixteen and seal the seven-point win, 47-40, Rams.

The boy’s varsity championship was won by Terra Ceia Christian as the Knights knocked off Hobgood Academy 63-55; claiming back-to-back-to-back championships after going undefeated (12-0) in the regular season. They’re received the conference’s lone boy’s varsity post-season bid and will travel to Pope John Paul II in Greenville for a first-round tournament game tonight (Tue).

AHOSKIE – You could tell Dylan Edwards was feeling it. From the minute the junior forward stroked his first three-point... read more