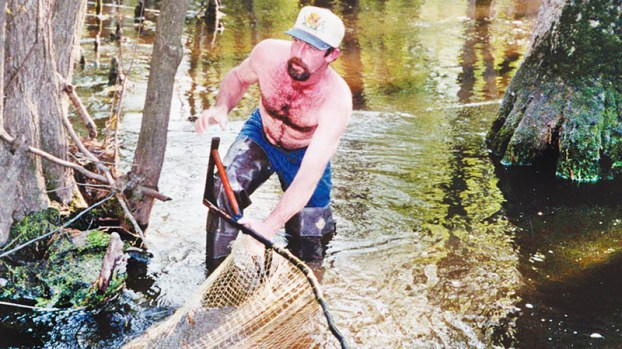 Back in a time when herring were plentiful in the Vaughan’s Creek area of Hertford and Northampton counties, scenes such as this – using a dip net for catching the tasty fish – were commonplace.

Over ten years ago, the Marine Fisheries Commission put a ban on herring fishing in North Carolina. According to North Carolina Wildlife Resource Commission (NCWRC) research, the herring population suffered a decline which they have yet to recover from. The moratorium was put in place to allow the fish a chance to regain their previous numbers.

Last week, local fishermen met at the Conway Ruritan Club with a representative from NCWRC to talk about current herring population numbers and the possibility of lifting the ban.

Bill Harris was one such fisherman who would like the opportunity to catch herring again.

“We’re not asking for catching them by the ton. Not even 100 a day, not even 50 a day,” Harris said in an interview with the News Herald.

Harris and other fishermen say they are simply seeking the ability to fish for herring on a limited basis. He estimates a reasonable amount allowed during the season—which runs from March to May—would be about 12 herring per day or enough to feed a family of four.

“Back in the 60’s, it used to be so plentiful,” Harris said, remembering a time when the herring population was much larger, “little kids would be around picking them out of the water. You’ve got half a generation that’s missed out on experiencing, seeing how these fish are caught.”

Herring are saltwater fish which swim inland each year to freshwater rivers and tributaries to lay their eggs. The young fish then swim back to the ocean before returning to freshwater to start the cycle all over again for the next generation of fish.

NCWRC sends representatives out to waters such as the Albemarle Sound and the Chowan River to check population numbers. Currently, their data says the herring population is still too low for a sustainable harvest.

Harris said he believes they should instead be checking more within the creeks which feed into the river because that’s where locals are seeing the fish in abundance. He also cautioned against searching for the fish during colder weather when the herring like to stay down deeper in the water where they might remain undetected. These reasons, he said, might skew the NCWRC population data results.

In 2016, local fishermen like Roger Cofield, Harris, and others, spoke at county commissioner meetings in Northampton and Hertford to make people more aware of the situation and to work towards lifting the ban. They also have talked to NC Representatives Michael Wray and Howard Hunter III to see what can be done.

“He explained to some extent that it was basically out of their hands,” Harris reported of what Wray said. “It was federal. It wasn’t as easy as it looks.”

Harris, however, was optimistic the meeting with the NCWRC had done some good, explaining that they now had someone to contact at the commission they never had before. The fishermen can now help contribute to a more thorough study of the local herring population numbers.

“If we happen to go down into the creeks and see something extraordinary, we could give [the NCWRC rep] a call and he’d come send somebody down to observe what we see,” Harris explained. “It’s good we’ve been able to establish a channel of communication because we’ve seen some stuff.”

Their goal is to at least be able to fish on a limited basis again. Harris said it wasn’t fair that fishermen out in the Atlantic Ocean were able to catch as many herring as they wanted, but locals in the Roanoke-Chowan area weren’t able to experience herring fishing at all anymore.

Another meeting with NCWRC will be held in September but the exact date is yet to be determined.

Opening day for filing for the May 2018 Primary produced candidates, and political matchups, in three of the four counties... read more