Written in 1953 to reflect hysteria inspired by Senator Joseph McCarthy’s campaign to rid the United States of Communism, the play is just as timely today as it was sixty-five years ago when it was written or more than three and one quarter centuries ago when it is set.

The cast of 21 includes veteran and neophyte, old and young.

Playing the role of John Proctor, basically a good man but with a secret, is Steve Harders. Desiring to protect his secret, public knowledge of which would damage his good name, Proctor allows the frenzy that envelops and destroys the town. Trying to stop the hysteria by casting aspersions on the young girl responsible but still protecting himself, he realizes he is too late, and even his truthful confession only condemns him while not exonerating others wrongly charged. The audience will be interested in whether or not Proctor can “have his goodness.” 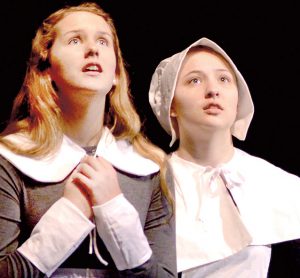 Some of the actors in the upcoming Gallery production of The Crucible are pictured here rehearsing in costume: Colleen Curley (left) in the lead role of Abigail Williams, and Kailey Lassiter as Mercy Lewis.

Harders, a Professor of Drama at Chowan University, was most recently on the Gallery stage as Atticus Finch in To Kill a Mockingbird.

Proctor’s wife, Elizabeth, is played by Harders’ real-life wife, Lori, a science teacher at Central Middle School in Gates County. Feeling her anguish as she is unjustly accused, the audience equally understands Elizabeth’s motivation, her love for her husband and children, and her own feelings of inadequacy.

Gallery regulars will remember Lori Harders as Shelby in Steel Magnolias and Belinda in Noises Off.

Veteran Gallery actor and director Tommy Hurdle brings to life the part of the Reverend Samuel Parris, the minister of Salem’s church. Parris demonstrates simultaneous, seemingly contradictory, superiority and inferiority complexes. Hurdle manages to embody both qualities, presenting the audience with a man concerned with securing his place in the community while afraid he cannot do so.

Another Gallery veteran (Life Goes On, Little Shop of Horrors, Spamalot, To Kill A Mockingbird, and Noises Off), native Windsorian Michael Spruill plays the part of Deputy-Governor Danforth. Danforth presides at the witch trials, and Spruill convinces the audience that Danforth was convinced he was doing the right thing. Spruill currently is Assistant Site Manager at Historic Hope Plantation.

Playing the leading role of Abigail Williams is Colleen Curley, a student at Ridgecroft but already a veteran to the Gallery stage, having had leading roles in the Gallery Summer Youth Workshop productions of Guys and Dolls and The Lion King. After seeing Colleen in this role, the audience will fully understand how an entire community could have been caught up in actions instigated by such a youngster.

These veterans are joined by Peter Pellegrin, English instructor at Roanoke-Chowan Community College, a veteran community theatre actor but new to the Gallery stage. Pellegrin takes the role of the Reverend John Hale. Called to the Salem community because he is an authority on witchcraft, his arrival sets the hysteria in motion, which he later regrets as he realizes what his presence has caused in the community.

The Crucible is directed by Hugh H. Davis, English instructor and Librarian at C.S.Brown Stem High School in Winton.