AHOSKIE – You could tell Dylan Edwards was feeling it.

From the minute the junior forward stroked his first three-point basket to open the game until he exited midway through the third quarter; he was determined to make it a memorable night on the Ridgecroft School floor.

Edwards’ 22 points led a trio of Northeast Academy players in double-figure scoring en route to a 66-49 win over The Albemarle School here in the Tarheel Independent Conference tournament.

Edwards swished through a triple to open the game, and while Albemarle kept it close in the early going, the Eagles were finally able to string together a short 7-0 run to open things up. The Colts made a free throw, but NEA strung up another seven unanswered, capped by another Edwards trey that ended the quarter with his team leading 19-5. 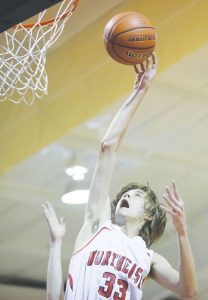 Northeast kept up the pace, running and gunning as Albemarle had no answer in the second quarter. Justin Jones nailed a pair of free throws for a 20-point lead, 35-15, before Albemarle planted a couple of free throws of their own coupled with a short jump shot to trail 35-19 at halftime.

From a jump shooting team in the first half, Northeast transformed their game plan into more of one attacking the basket. As Albemarle tried to counter, they began to rack up fouls. At the Colts’ end of the floor Jacob Stallings was trying to rally his teammates with six straight buckets that reduced the deficit to 13 at 39-26 midway through the period. Neither team’s defense was on point the rest of the quarter, but another big Stallings play got it to a dozen down, 48-36. Jones’ running one-hander, however, pushed it back to 14-down, 50-36.

Ryan Rowe sparked a fourth quarter run that upped Northeast’s advantage to 20 again, 56-36, before Albemarle rallied and got the deficit back to 14 at 58-44. The rest of the game was pretty much matching baskets as the coaches shuffled the line-up before the Eagles could claim a 17-point win. Northeast advances to meet Hobgood in the varsity boys’ semi-final on Friday night.

AHOSKIE – Welcome back. After a checkered season in which her play has been erratic, Lawrence Academy’s Lauren Baker seemed... read more