MURFREESBORO – Chowan University announced a new branding strategy that marks the most significant change to its visual identity in more than a decade.

“The University’s previous branding served us well, but Chowan University is constantly evolving,” remarked Brooke Reich, Assistant Vice President for Development and Director of University Relations and Communication. “It is important that our logo reflects who we are today, as well as our history and heritage. An updated image also helps us keep pace with current trends and standards.” 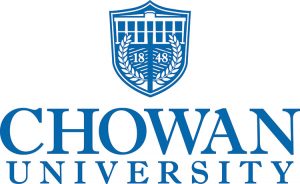 Designed by Chris Stagl, Associate Professor of Graphic Design, the official launch of the new logo was January 1, although the University began slowly phasing in the logo the month prior. The new logo honors Chowan’s Christian heritage while incorporating iconic McDowell Columns Hall, the first building commissioned on the Chowan University campus and erected in 1851.

“Our research revealed that many peer institutions, especially those that set the standard among Christian colleges and universities, now incorporate visual branding that is iconographic in nature,” Reich continued. “Iconographic simply means that the logo uses recognizable, yet symbolic, imagery.”

In the case of the new logo, the choice of campus icon was easy, as the design highlights historic McDowell Columns Hall, easily the most beloved and recognizable campus icon.

The basis of the new identity rests on the University’s strong foundation and core values. The central pathway symbolizes the path to success trod by students both as they enter Chowan University to pursue their education and as they depart to pursue their future goals. A laurel wreath and the year of founding echo the enduring Chowan University seal which is now elevated to special and significant use only. Close inspection reveals a cross and chalice built into the negative space of the artwork, resonating the University’s Christian heritage and the guiding philosophy of Faith in Your Future.

Although the new logo will replace the seal in certain instances, the seal remains an important part of Chowan University. It will be elevated for more formal and exclusive uses like diplomas, official documents, and formal programs.