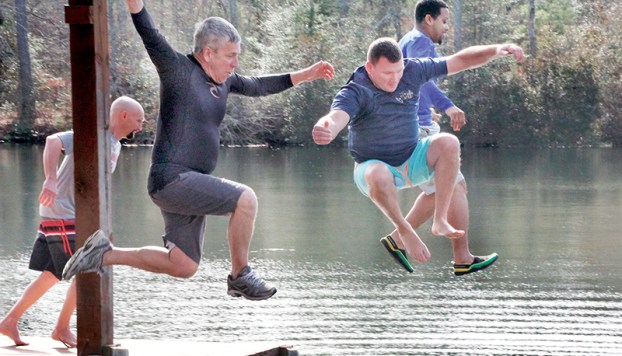 This group of brave souls leap off a pier into the 47-degree waters of Beaver Lake, part of the 7th annual Gates County Polar Plunge on Jan. 27. Staff Photo by Cal Bryant

EURE – The 7th annual Polar Plunge was held at Beaver Lake on January 27. Over 35 plungers braved the frigid waters. Once final pledges are in, over $5,500 will have been raised.

A great time was had by all who attended the plunge, there were at least 150 people on hand to join the festivities. Plungers traveled from Maryland and Havelock (as well as Durham, Greenville, Wilmington and Newport News) to join in the fun.

Helping to make the cold bearable for everyone was the chili challenge. Without the promise of the delicious chili, prepared by those who donated their best recipes, the plungers might not have taken the plunge!

Along with the annual chili challenge, the GC Rescue Squad was on hand to provide delicious breakfast items and chicken salad as well as hotdogs by Special Olympics. Warwick Baptist Church Youth were there to serve free hot chocolate. Vendors on hand were Crystal Hawks and Jodi Williams, who shared their original handmade wares.

The chili challenge winners this year are as follows: Alegrea Boone in 1st place; Leanna Tyler in 2nd place; and Sallie Ryan in 3rd place. Thanks to all of our chili chefs for helping to make this event possible. Without the additional delicious efforts of everyone who entered we wouldn’t have been able to feed all the cold brave plungers!

The event kicked off at 11:30 a.m. with a beautiful rendition of the Star Spangled Banner by Jessica Bradshaw (GCHS 2017 Homecoming Queen) and the Athlete’s Oath, by our local athletes.

The team challenge was a big hit this year and the competition made it hard for the judges once again! Winning the biggest trophy of the day, for Most Creative presentation, was Buckland Elementary’s Kung Fu Panda. Winning for Most Creative costume was Stephen’s Super Supporters and Most Creative Name went to GCHS’s Polar Plunge Express. Honorable mention went to Coopers Super Troup. Winning teams received a traveling Polar Bear Trophy, which will come back each year to be won again!

Rounding out the rest of the teams were Gatesville’s Chillteam and our Central Office team – Ice, Ice Baby. A big thank you to the team leaders for organizing their teams and to all those who donated to their teams to help them reach their goals.

Much of the monies raised comes from our school teams who are a big part of the success of the event. Another big thank you to SECU-Gatesville for challenging the community to raise enough money to require Jonathan Jones to take the plunge off the pier. The goal was reached and then some, with $1,500 being raised just to see him jump off the pier.

This event could not have been possible without its host, Beaver Lake Ski Club and its members who worked hard earlier in the week to have the event area ready and pitched in that day as well, as well as providing the wood for the bonfire.

Without their generous support, this event and our Tread The Mill Walk would not be successful. Because of the donations from our sponsors and those taking the plunge, our athletes are able to travel and compete, at competitions in Smithfield, Durham, Raleigh and Fayetteville.

Special thanks and recognition to the Gates County Rescue Squad for their presence at the event. Without their willingness to be a part of the safety net for our plungers, we could not have this event.

Special recognition is given to Johnny Greene and the Gates County Maintenance staff for helping prepare for the event along with the hard work by the volunteers who helped put the event together, helped with set ups, cleanup, registration, team judging, chili, judging, the bonfire, concessions and much, much more.

Plans are already under way for the 7th Annual Tread The Mill 2017 in October and the 8th Annual Polar Plunge 2019 (last Saturday in January). We hope you will join us at the Millpond in the fall and Beaver Lake in January. It’s never too early to be thinking about Freezin’ for many wonderful reasons— our local Special Olympics athletes!

WINDSOR – Bertie County Commissioners and the Board of Commissioners for the town of Windsor met jointly at the Cashie... read more