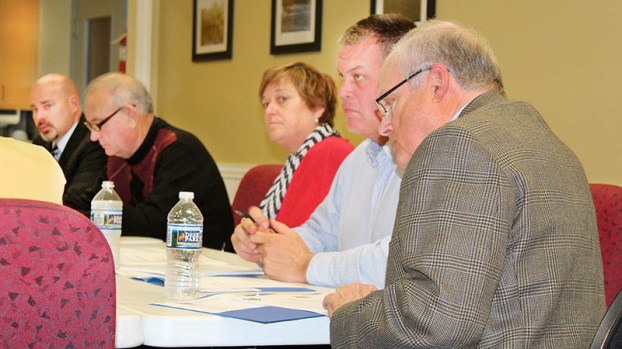 Members of both the Windsor Town Commissioners (above) and Bertie County Commissioners met jointly recently to discuss projects the two governing bodies are working on together. | Staff Photos by Gene Motley

WINDSOR – Bertie County Commissioners and the Board of Commissioners for the town of Windsor met jointly at the Cashie River Center here Jan. 22. The tandem meet was held mainly to brief each governing body on topics from flood control to potential teacher housing, and how the two boards might work together.

“We thought we’d get together and share this information because there are a lot of moving parts, so to speak,” said Bertie County Manager Scott Sauer, who served as co-moderator. “Tonight we’ll brief each other and entertain questions.”

“We have a great relationship between the county and the town and that has been absolutely critical,” said fellow moderator, Windsor Town Manager Allen Castelloe. “We appreciate you keeping us involved in everything that’s gone on in the last year.” 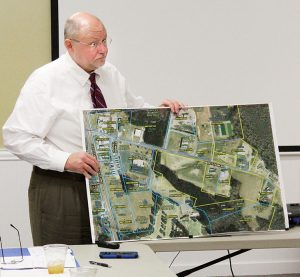 “Hopefully we will have it (the study) by February,” Sauer explained. “At that time we hope to release it to the public.”

Related to the NCSU study is another adjunct study conducted by East Carolina University and NC LOW (Land of Water), led by ECU’s Dr. Stan Riggs entitled ‘Dynamics of the Cashie River Drainage Basin – Evaluation of Change and Resilience of a Coastal Ecosystem’. Riggs’ study has been supported with local funds by both Windsor and the county.

“He (Riggs) is very anxious to get up here and begin his work,” said Sauer.

Windsor Mayor Jim Hoggard said Riggs’ study would give both the town and the county something to work together on.

Sauer then reviewed Golden LEAF Foundation (GLF) grants that have been made to the county totaling some $3,801,720.

“We believe that (construction) money will be committed sometime in February,” noted Sauer.

$311,720 in GLF funding is earmarked to aid Windsor’s replacement of a wastewater pump station.

“For now, the electric feedback motors are above ground,” said Castelloe. “Just before they get swamped underwater we have to cut them off and then pray they come back to life. We’re also replacing all the control panels, making them submersible; and, converting from a drywell to a wet well system with our wastewater (for storm water control).”

Finally, a GLF $240,000 grant for the Teacher Housing Initiative’s came as a pleasant surprise to both the county and the town.

“This was made possible thanks to the town’s donation of the site for the facility,” said Sauer. “They (Golden Leaf) seem very committed to helping us.”

“We had no idea they would entertain other things for the local population,” said Commissioner Ron Wesson.

Three parcels of land in the Windsor vicinity are also in play for a trio of future projects: first, both the county and the town are working in conjunction to acquire a 2.9-acre tract for the new library and cooperative extension offices.

“The town is going to participate in the cost-sharing of about one-third of that,” Sauer said.

The County Manager also revealed that an anonymous donation of $136,000 has been made for the library project.

“That’s local money committed to this project,” he said. “They are excited about doing something for the library side of the house,” he said.

The second land donation project is for 5.33-acres in the Harrell Heights section for the teacher housing initiative; and finally, Martin Community College is interested in construction of a fire training facility on two acres on County Farm Road located near the new Bertie County Sheriff’s Office complex.

“Fire training is evolving,” said Hoggard. “We haven’t had training in the past for multi-level construction and with a new ladder truck (Windsor Fire Department), and most modern fires being chemical in nature, many departments are not trained to handle those types of fires. They wanted to put something here because our fire departments (under MCC) train jointly for these high-rise type fires and we can’t have all three fire departments out of the county at one time. We couldn’t put it in a residential area, so we thought this area would be a good place to locate it.”

Sauer did add that Bertie County’s new EMS-1 station, currently at Bertie Early College High School on Governor’s Road, will also be located on County Farm Road, but there is plenty of room for both EMS expansion and a training tower.

“Unlike some of our other projects involving Mother Nature, this one might be rather simple,” Sauer acknowledged.

Wesson also emphasized the importance of local census takers throughout the county for the 2020 census.

“We’ve got to get this census thing right for the county,” Wesson said. “Every person that we miss is valued at $1,600 per person. If we miss a group home with 10 people in it that’s $16,000 the county loses (in federal funding) for 10 years until the next census. We need to have the right head count; we need local people going door-to-door in local areas.”

One of the last presentations was from Chris Hilbert of Holland Consulting Planners who gave a brief report to the twin boards. Hilbert first complimented the joint boards on the mitigation model used following the storms of 2016.

“This mitigation effort is really a model to what other communities should be doing,” Hilbert said. “Working with 30 different counties I’ve seen what they do, what they don’t do, and why. So, working with Scott and Allen has really been wonderful.”

“That’s $1.7 million in funds that both the town and the county are sponsoring,” Hilbert noted. “The biggest one is about $6 million the town is sponsoring for 34 buyouts, 11 elevations; and within this amount we think we can do more.”

Hilbert said the Holland group would be doing more applications for funding because additional money is available for CDBG low-income housing.

“It’s been a planning process,” he stated. “We’ve tried to apply for everything they’ve come up with.”

From Fairbanks to the Inner Banks