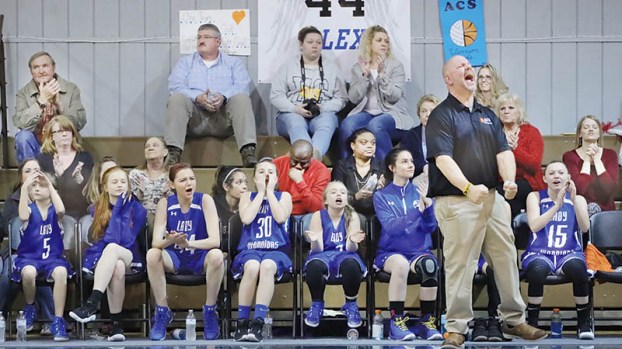 Ahoskie Christian girls basketball coach Kelly Perry (black shirt) erupts with excitement as the Lady Warriors celebrated Senior Night with a big upset win over Victory Christian of Elizabeth City, 33-27. The expressions on everyone’s faces from the coach to the players to the fans tell how huge this win was. The ACS boys also won, 58-48, to complete the sweep. | William Anthony Photography

AHOSKIE – The Ahoskie Christian girl’s basketball team sent their seniors out in style with a huge upset win, 33-27, over conference foe Victory Christian here Thursday night. It was the Lady Warriors’ third win in their last four games.

Senior captain Haley Knox closed out her home career by pacing the home team with an 18 point performance, sparked by the Warriors scoring 16 points in the fourth quarter. Knox was also 10-of-18 from the free throw line. Cameron Wallace added eight points with three for Kaitlyn Parker and two points each for Autumn Vinson and Calynn Wallace.

The Ahoskie Christian boys won their 10th game of the season, 58-48 over Victory to complete the sweep. The Warriors were led by Damien Jones – the lone senior on the team – with 19 points. Ryan Blowe added 14 points and Nick Ellis had 11. Jackson Perry contributed seven points with four for Garrett Brown and three by Jaylen Freeman.

Ahoskie will play at Gramercy in Newport on Tuesday, and are in Askewville on Thursday to face Bethel Assembly. Friday they will close out the week at Cornerstone Christian in Weldon.