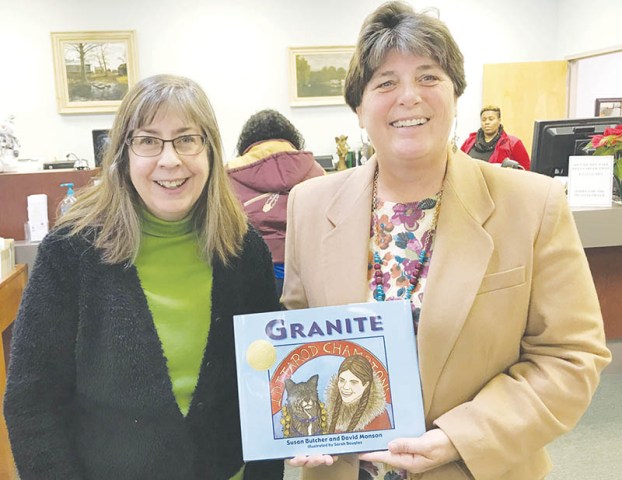 Bertie County Commissioner Tammy Lee (right) and Bertie County Public Library Branch Manager Nancy Hughes pose with a copy of “Granite”, the children’s book that tells the story of the lead sled dog who eventually won the Iditarod race in Alaska. Lee secured a copy of the book following a personal trip to Alaska last fall.

From Fairbanks to the Inner Banks

“Last September, Vernon (husband) and I traveled to Alaska for a wonderful vacation,” Lee recalled earlier this week. “Little did I know that while there we would find a Bertie County connection.”

The Lee’s vacation took them to Fairbanks, where even in autumn the temperatures can dip to 30-to-40 degrees below zero. Fairbanks is also the home of the Riverboat Discovery, a large passenger steamship in operation since the end of the 19th century that cruises the rivers of the Yukon.

A portion of the river cruise along the Chena River took them to Steamboat Landing and the Susan Butcher Trailblazer Kennels. 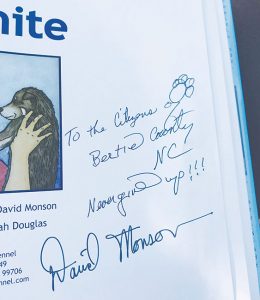 Butcher was the second female and first four-time champion (1986-88, 1990) of the Iditarod, the grueling near-700 mile sled dog race across the great white North from Anchorage to Nome that takes place every March. The race tests the best sled dog mushers in the world.

After retiring, Butcher would talk with the passengers on the river cruise and tell them her story from her training camp along the river.

“Susan passed away in 2006 after a long battle with cancer, her husband, David (Monson) later wrote a children’s book about Susan and her lead dog, Granite,” Lee continued. “Granite was the ‘runt’ of a litter of sled dogs (huskies) and not expected to survive, much less be the lead dog on a team that would eventually win the prestigious race four times and the Golden Harness Award for outstanding lead dog in 1988.”

Granite was Butcher’s greatest lead dog, but he didn’t start that way. He was a shy, scraggly pup that the other dogs pushed around, but Susan saw his potential. Together they worked until he became leader of the team. While they were training for the Iditarod, Granite became deathly ill. The veterinarians said he would never be strong enough to run the race. Granite refused to accept this, and slowly he started to recover and by the time of the race he was strong enough to start, but Susan wondered if he could finish the entire race. Confidently Granite guided the team into the lead of the race, when suddenly they were caught in a raging Arctic blizzard. Granite had to call on all his inner canine strength and courage to not only save them but to also win the race in 11 days, 11 hours, and 41 minutes.

Monson succeeded Butcher on the Discovery cruises and now tells Susan and Granite’s story from the same training camp along the river to the passengers and meets them down the river at one of the boat’s stops.

“We met David there and related to him the plight of our Bertie county citizens, being one of the poorest counties in North Carolina and having flooded four times now in 17 years,” Lee related. “I told him that l thought even though counted out by many, Bertie citizens were resilient and have never given up and how we continue to come back stronger each time.”

Lee later relayed to Monson how the county’s library had flooded and that at the time, they were currently without one.

“I told him that I would like to purchase one of his books to donate to our library,” Lee said. “He gladly autographed the book and wrote a short message to the citizens of Bertie County. However, you’ll have to visit the library to read it, I won’t give it away here.”

With the opening of the temporary location in Windsor Square, Lee was finally able to donate the book, Granite, to the library’s children’s book collection.

“When I gave the book to the Library, librarian Nancy Hughes, said, ‘Wow, an autographed copy’,” Lee stated. “I felt humbled that first of all I could take such a wonderful trip, and second that I was able to visit the training camp and bring back such a great book for the children of Bertie County. I pray that when the children read the book they will be inspired to persevere even when others say they can’t and when the task seems impossible, just like Granite.”