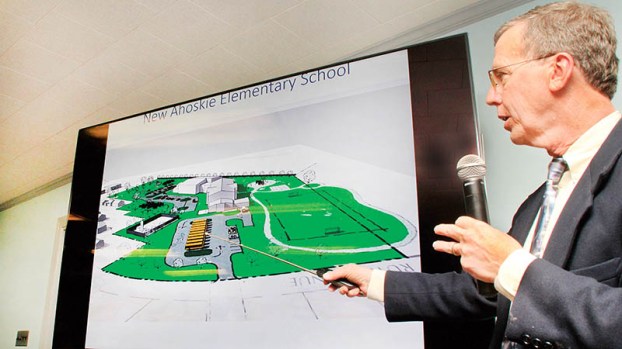 Thomas Hughes, architect for the Raleigh-based architectural firm SFL +A, points to an area of the bus parking lot at the proposed new Ahoskie Elementary School. Hughes gave an update on the project at last week’s meeting of the Hertford County Board of Education.

WINTON – There are many hurdles left to clear, but at least for the time being there is a visual plan in place for the proposed new Ahoskie Elementary School.

At last week’s meeting of the Hertford County Board of Education, Thomas Hughes of the Raleigh-based architectural firm SFL +A, provided an update and a visual presentation of what the new facility may look like.

Before revealing the architectural concept, Hughes said one of the things his firm likes to do in advance is to figure out how a new project, such as this one, will represent the community, the unique heritage where it’s located.

“A school building provides a sense of memory, a sense of an image, an identity, that ties it to its community,” Hughes observed. “We did some research on Ahoskie and this town has a unique past. We look at the buildings here and how that factors into the town’s identity. We look at the present school and how it has served the community. We look at the site where the new school will be built.”

As far as the current Ahoskie Elementary School, Hughes noted it has faithfully served its purpose.

“It was built in 1959….it has reached its life expectancy,” he stressed. “You’ve gotten great use out of that building, but it’s showing its age. But it does have character.”

The location of the new Ahoskie Elementary School is across the street from the current campus, adjacent to the rear of Bearfield Primary School. The county already owns that land.

In a digital presentation, Hughes pointed out the “lay of the land” at the new site. The school’s main entrance will be on First Street (NC 561), adjacent to the Town of Ahoskie Cemetery. He said that was done in an effort to keep the heavy traffic flow to and from the school out of the nearby residential areas. Faculty/staff and bus entrances to the school will be off Ruth Avenue. 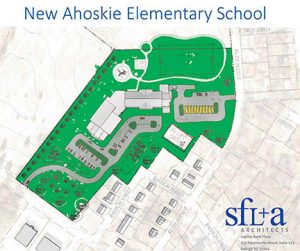 Shown here is the architect’s concept of the proposed Ahoskie Elementary School, with a main entrance off First Street (bottom left) and the bus/staff entrance off Ruth Ave. (top right).

“What that means the core space is a bit bigger to accommodate a gym, an auditorium and a cafeteria,” he said.

He noted the gym/auditorium areas of the school could be used by community members.

“We can design it to cordon off the rest of the school, prevent the general public from accessing certain areas, when the gym or auditorium is in use after hours for community events,” Hughes said. “The same can be said for the cafeteria space on the other end of the school (near the Ruth Ave. entrance) for use as a smaller meeting space for the community.”

The auditorium will seat 450.

“We tried to design this as a single-story building, but it wouldn’t fit on the designated space,” Hughes remarked. “That area matches well with the double space high of the gym and auditorium.”

The outdoor playground area will be shared with Bearfield Primary School.

“We look forward to working with you and your firm on this project,” said School Board Chairman David Shields at the conclusion of the presentation.

Plans to build a new Ahoskie Elementary School have gained steam over the past two years.

At their second meeting in September of last year, the Hertford County Board of Commissioners met with Hughes along with leaders of the county’s school system, including Shields and HCPS Superintendent Dr. William Wright. At that meeting the cost of the project was estimated at between $15 million and $16 million.

“That price includes the consideration for an auditorium,” Hughes said at the September meeting. “We’re also looking at building an energy efficient facility, the less money you have to pay in energy costs means more money you can put into the education of your children here in Hertford County.”

The Superintendent added at the same meeting that based on the current number of 4th and 5th graders enrolled at Ahoskie Elementary, if the new school had opened last year, the space requirements would be less than 500 students.

“We’re looking at future growth for that school, based upon the population base in our county being in the Ahoskie area,” Wright remarked.

As for the auditorium, Wright stressed the need for 600 seats.

Commissioner Curtis Freeman asked if the plans calling for an auditorium was exactly that, or was it more along the lines of a multi-purpose “gymtorium.”

“The auditorium is a separate facility,” Hughes answered. “In a gymtorium setting, everyone sits basically flat to the floor, meaning you’re looking at the back of someone’s head seated in front of you. An auditorium setting is built on a floor plan that slopes down to the stage. Plus, an auditorium can serve as a centerpiece for the entire community. If you can afford it, an auditorium is the better way to go.”

Commission Chairman Ronald Gatling asked about other options should the county want to save money on the project by excluding the auditorium.

“Then you look at a stage in a gym,” Hughes remarked. “You look towards a larger multi-purpose area, complete with a full basketball court. The downside is that a multi-purpose facility gets more wear and tear than an auditorium.”

Dr. Wright said a multi-purpose area at the new school would be consistent with what is currently in use at both Riverview Elementary and Bearfield Primary.

“While we want our children to have the best things and place them in an environment that promotes education, there are other driving forces with this proposal to build a new school,” said Hertford County Manager Loria Williams at the September meeting. “The main thing is cost. This board is responsible for approving any new schools, and they must keep in mind what we can afford to add to our existing debt service.”

WINTON – Does your child know what to do in the event of a house fire? If not, they need... read more