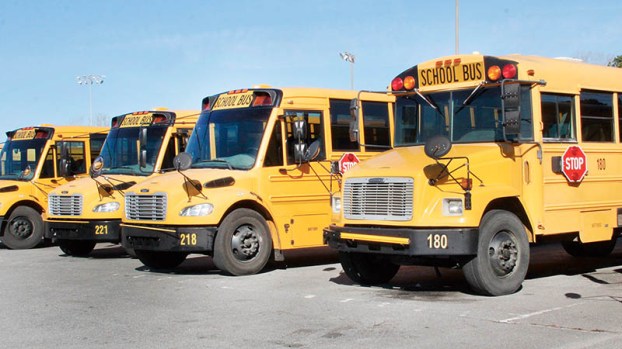 Hertford County Public Schools buses wait for their drivers to make the daily rounds to pick-up and drop-off students.

Making up for lost time

Two winter storms in January blanketed the Roanoke-Chowan area with several inches of snow, paralyzing travel throughout the four counties for a brief time. As a result, many schools cancelled several days of classes and are now faced with deciding how to make up for lost time.

In Gates County, students missed nine days of classes, the most out of all the local schools. The lost time also delayed exams by one week. Midterm exams were held instead through January 26, reported Superintendent Dr. Barry Williams.

Gates County students are scheduled to make up days on February 3 and 19 as well as March 29 and 30. Two early release days, March 21 and May 25, were extended to full school days. For teachers only, an additional two days were added to the end of the school year on June 14 and 15. 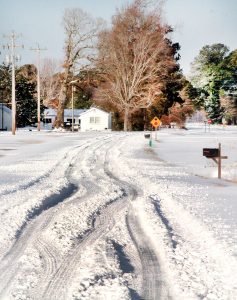 Icy roads from two winter storms earlier this month forced the cancelation of classes at all local schools for as many as nine days.

Students attending Northampton County Schools were out for eight days because of the snowy weather. Patricia Harris, who spoke on behalf of Superintendent Dr. Monica Smith-Woofter, noted that they’ve already made up one of those missed days. The rest of the make-up schedule will be determined at a later date by the school board.

Hertford County students have already made up one day, but will also now have to attend school on February 28 and March 30. All early release days have now been changed to full days. These days are February 14, March 8, March 29, April 26, and May 17.

Hertford County Early College is the only exception, Wright explained, because they’re already on a modified calendar. Those students will not have to make up any days.

Exams for high school students in Hertford County were delayed a week because of missed days. They’re set to conclude now on January 26.

The situation for Bertie County Schools is a bit different from other local school systems. Though they missed five days, none will need to be made up.

According to interim superintendent Dr. Del Burns, a system has been in place for these kinds of circumstances since Hurricane Matthew in October 2016.

“We (the school board) made a decision back then to add 30 extra minutes daily to our school day for students,” Burns explained. “The state student calendar requires 1,025 hours in a school year, and thanks to our policy, Bertie County students have accrued nearly 1,100 hours.”

The key, Burns says, is not making up days, but rather hours in a school year. The five lost school days total 30 hours and the county has in excess of 100.

Among students, Aulander Elementary STEM School is the only exception due to their year-round calendar.

“Their days (AES) are made up during their intersession period,” said Burns, who noted the next intersession will be March 26 to April 13.

Private schools throughout the Roanoke-Chowan area, too, have been working on how to make up missed days.

Ridgecroft School reported a total of six snow days, but they will only make up one. Because the school already had built five extra days into their schedule for circumstances just like this, their only makeup day will be March 16.

For students of Ahoskie Christian School, the plan to make up the five days they missed is only tentative right now. According to Principal Elaine Pool, a few half days will be changed to full days. Those make-up days are currently planned for February 2, March 29 and 30. The school has already made up one missed day on January 12.

The snow also shortened the exam review period for the Christian school’s students. Pool explained that the teachers and students worked together to make up for lost time before the students had to sit for their exams.

Students at Northeast Academy were out of school for a total of six days because of the snow. Kim Johnson, the school’s secretary, stated that they’d already made up two of those six so far. Two more make-up days are scheduled for February 26 and March 30.

Johnson explained that the school’s headmaster, Leon Dickens, intends to make up the remaining missed time by extending the school day an extra hour over a period of eight days. They haven’t decided yet when that eight-day period will be, but Johnson said it would be sometime after basketball season has concluded.

Bethel Assembly Christian Academy missed five and a half days. Their plan, similar to other area schools, is to change scheduled half days into full days. There will be one additional make-up day, but that date is yet to be determined.

Lawrence Academy was fortunate enough to be on break as the snow rolled through, said Principal Jason Wynne, which meant that the six days they missed were not a problem. The school has make-up days already built into their schedule, so the students will not have to make up any days moving forward. Classes will continue on as usual.

GATESVILLE – While the main focus on Monday centered on the arrests of four Gates County lawmen, a former member... read more