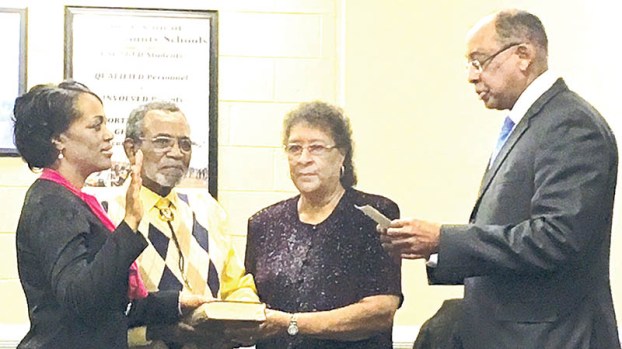 6B Senior Resident Superior Court Judge Cy Grant (right) administers the oath of office to new Bertie County Schools Superintendent Dr. Catherine Edmonds (left) on Tuesday at the Bertie County Board of Education meeting in the Central Office boardroom at Windsor. Holding the Bible are Edmonds’ parents (from left) Weldon and Novella Edmonds.

WINDSOR –Dr. Catherine Edmonds took the oath of office as Superintendent of Bertie County Schools (BCS) on Tuesday prior to the regularly scheduled meeting of the Bertie Board of Education. The irony of the timing of the occasion was not lost on the Granville County educator

With family and friends in attendance, Edmonds received the oath from District 6B Senior Resident Superior Court Judge Cy Grant. Prior to a reception in her honor she spoke of the relevance of the occasion; how it had occurred so close to the MLK holiday.

“I have learned that just because you embark on something new doesn’t mean you tear down what has already been built,” the superintendent continued. “You build up something new in the foundation that exists.”

Following a short reception, attended by current and former educators and Bertie County officials, the regular Board of Ed meeting was held.

Speaking of behalf of the principals at all of the county’s schools, Bertie Middle School Principal William Peele presented the board, outgoing interim Superintendent Dr. Del Burns, and BCS Administrative Assistant Kimberly Cooper with fruit baskets.

“Great leaders never set out to be great leaders,” Peele said. “They set out to make a difference. It’s not about the role, it’s about the goal. We, the principals, enjoy working with you, and we have learned a lot from you.”

He then recited the words of the school system motto: “Together we can, and together we will.”

Burns, who leaves after having taken over supervision of the school district when former superintendent Dr. Steven Hill left for a similar position in Pender County, then emphasized to Board members and staffers their primary responsibility is to serve the children of the county.

“To those present, let me say that it is no small decision to stand for election to serve,” he intoned.

While the school district was in the midst of severe economic difficulties, Burns came at a time when a plan approved by the state Board of Education, was entering the first of its five-year for financial recovery.

The Bertie County school district is in the midst of severe economic difficulties, requiring the intervention of the state. Among its problems, the district has an approximately $700,000 deficit in its general fund and a deficit of about $135,000 in its restricted fund. The state also found a lack of financial management and oversight resulting in specific general statutes being violated.

The recovery plan will allow the county to get rid of the deficit, establish better financial and reporting systems, and ensure that the district complies with the law. It has five years to make a turnaround and has already taken some steps on the road to recovery.

“You chose to serve children, and your job is not for the faint of heart,” Burns added. “I am proud to have worked for you, and you should be proud of yourselves and what you have accomplished: You are fiscally responsible; you hold the superintendent and (school system) employees accountable; and you operate with good governance as you get things done and endeavor to put all children first.”

For Edmonds, she comes to Bertie County riding a successful quarter-century career in public education in North Carolina. She has been director of Educational Leadership and Development and State Director of the NC Principal Fellows Program through the University of North Carolina General Administration in Chapel Hill.

Prior to that role, Edmonds worked for a year with NC State University’s Northeast Leadership Academy, where she taught, supported, and mentored principals across the state, and she spent seven years at the state Department of Public Instruction, helping turn around schools in Halifax County. She has also been a classroom teacher, assistant principal, principal in the public schools of her native Granville County; and as an area superintendent.

Edmonds holds a bachelor’s degree in math education from North Carolina A&T State University and both a master’s and doctorate from NC State. Her parents still live in Oxford (Granville County) where she grew up.

Edmonds’ contract, a three-year deal, calls for an annual salary of $134,000 and the use of a vehicle owned by Bertie County Schools.