The circumstances of Little’s birth did not foreshadow a future so rich in diverse experiences and service leadership. Born in 1927, to a farming family in Stanly County, North Carolina, this youngest of five children might have remained on the farm had it not been for the Second World 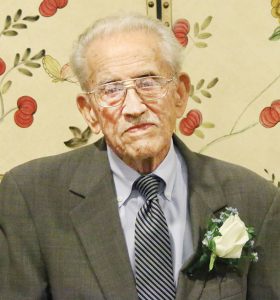 War, which, as it did for many Americans, affected the life decisions and directions for the family. Moving from the farm to the city, most of the family worked in the textile mills. After high school, Little followed his brothers into military service and joined the U.S. Navy. Following his honorable service, he went to college on the GI Bill and became a respected high school teacher and award-winning athletics coach.

After this period of teaching and coaching, he worked for the federal government in critical capacities at the Department of Air Force, the National Aeronautics and Space Administration, and the Department of Energy. Little has also served as a member/officer of the North Carolina Senior Tarheel Legislature, Chowan University Board of Trustees, Northampton County School Board, Duke University Council on Aging, County Forest Association, and as the chair/deacon for numerous government, agricultural and church committees.

Sharing in Little’s endeavors and successes of those early adult years, and for many years after, was his wife, Mary Jordan. They were married in Jackson on June 8, 1949, and together raised two children, Bill, III and Julie Kim, in whom they instilled the lasting value of giving while living and beyond. They co-founded the North Carolina Senior Education Corps connecting local retired citizen volunteers with school needs.

In 1997, God called Mary home. Their shared love for teaching and deep commitment to education abides across the state, to include a scholarship bearing their name at Chowan University.

As for Little’s giving, an exhaustive listing would be too lengthy, but it can be said of him that the mention of his name prompts a smile and words of praise for his many contributions to individuals, organizations, and institutions. Anyone who knows him well, and any who only know of him, would say without hesitation that W.J. “Bill” Little, Jr. has been a good Christian, a faithful husband, a loving father, a patient teacher, and a loyal friend.

Another Wednesday….another round of snow. A cold front is expected to arrive in northeastern North Carolina and southside Virginia on... read more