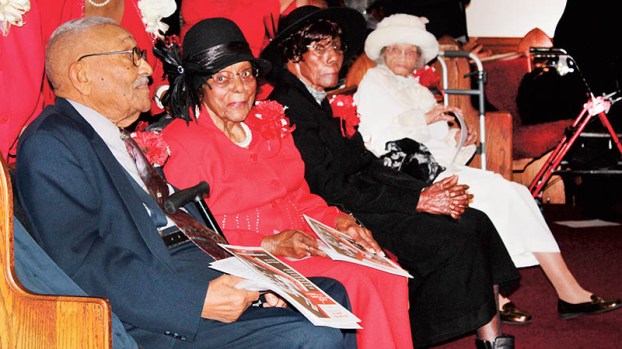 The event, usually framed around the Jan. 15 MLK birthday holiday, is held at a church in the Roanoke-Chowan area, which further honors King’s legacy as a Baptist minister.

King was assassinated in 1968 and the legislation designating the federal holiday in his honor wasn’t passed for another 15 years and signed by then-President Ronald Reagan in Nov. 1983. The day wasn’t officially commemorated until 1986. 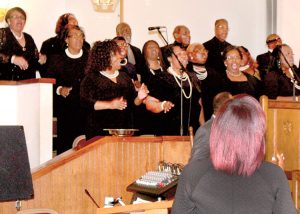 “Let’s remember and continue to educate our children, grandchildren and others about the great life of Dr. King,” said chapter president Linda McNair-Moore. “Let’s collectively keep singing the spiritual, ‘Ain’t gon’ let nobody turn me around; I’m gonna keep on walkin’, talkin’, and marchin’, up to freedom-land’.”

In keeping with an adjunct purpose of the holiday, a Day of Service, the Deltas chose as their theme this year: “Life’s Most Persistent and Urgent Questions is: “What Are You Doing for Others?”

“These individuals we’re honoring today have been there, done that, seen that, heard that, know that – whatever the ‘that’ is, they have been a witness, and God has blessed them to still be here witnessing,” said Jean Cherry, Trailblazers chairperson. “They are preparing a trail for others to follow, to keep being a leader, informer, and an innovator. They need to be recognized for that long trail they’ve left for us to follow.”

Some of the recipients were present to receive the honors, but the entire list was:

Sudie Sutton of Merry Hill, who will actually turn 100 on Jan. 24 2018, was a sharecropper’s daughter who said her parents instilled strong ethics and values in everyone they met. Sutton has several great-great-grandchildren as a vital part of her living legacy.

“She has seen tremendous change in the world, weathered the storms of life, and her family is grateful to God for granting her great longevity, fierceness of spirit, and an overflowing heart filled with love for everyone blessed to know her,” Cherry noted.

Virginia Moore of Harrellsville, a 100-year-old Walton Training School (now, C.S. Brown) graduate, who worked for years in Philadelphia and later travelled the world with her husband – a military veteran – before she retired to the Roanoke-Chowan area. She boasts of 11 great-great grandchildren.

Dora Green Perry of Powellsville, born in July 1917, and a great-great-great grandmother. She is active in her church (New Bethany of Harrellsville) and was described by Cherry as dearly loving her two dogs, Karen and Jack, and just sitting in her recliner with her favorite soft drink.

Littleton T. (Lit) Askew of the Piney Wood Chapel community who over the years has been a farmer, warehouse foreman, businessman, and civil rights activist. An active member of his Piney Wood Chapel Baptist Church he loves reading the Bible, sharing wisdom, and helping people.

The liveliest recipient was a very spry 102-year-old Clara Speller. The Indian Woods native has been a homemaker, seamstress, and peanut grader. Stepping to the rostrum, she thanked her family and friends and credited her Christian faith – including her favorite song, ‘I Won’t Complain’ – for giving her such ‘friskiness’.

Estella Simons of Powellsville was an educator in Bertie County Schools for over 30 years. A graduate of Elizabeth City State University, she was a charter member of the first ECSU Delta chapter, and past president of the Ahoskie Alumnae chapter.

“She finds pleasure in working in her church (Piney Wood Chapel Baptist) and her community,” Cherry noted. “We can certainly honor her for all that her hands have done and let her works bring her praise at the gates.”

Millie Dukes Brown of Union was the oldest honoree at 103. A former hospital and health-care worker, Brown now resides at Ahoskie’s Creekside Care Rehabilitation Facility, and at her age still reads her Bible regularly and still completes crossword puzzles.

Sophia Williams of Merry Hill, who will be 103 on Jan. 31, worked hard on the farm to one day owning her own homestead and was educated in a one-room schoolhouse on Avoca Farm. She was one of the founders of her Merry Hill Lodge, loves playing Bingo, and has a memory so sharp, she can tell you about life 90 years ago.

“Times have been better for us since King arrived,” Banks intoned. “We’ve come from a mighty long way; but we still have a long way to go. King did what he could, gave his life for us to come from the back of the bus, we don’t have separate facilities, but what are we to do now? We’re left here to carry on King’s dream, what he laid a foundation for; but it’s now up to us to take it on to the next level.”

Banks alluded to King being disappointed in some of what he might find in America today. Without touching on politics directly, the minister left a challenge with his congregation.

“Look what you’ve done today,” Banks wondered rhetorically. “Instead of going forward, we have to be alert to people who are trying to take you back.”

Banks reflected on his missionary work in Haiti after the earthquake, marveling at the hyperbole of these past days and how King would view it. He closed with a parallel to modern life quoting Scripture, and sounding much like King himself from a pulpit.

“At a time to bring us together, we are in the midst of a storm,” he stated. “And while storm clouds swirl and fierce winds may blow, we will get to the other side if we take the Lord with you. If you trust God, he will still the storm, and he will bring you safely out.”

AHOSKIE – The owner of the Tomahawk Motel here is praising the response and efforts of the Ahoskie Fire Department... read more