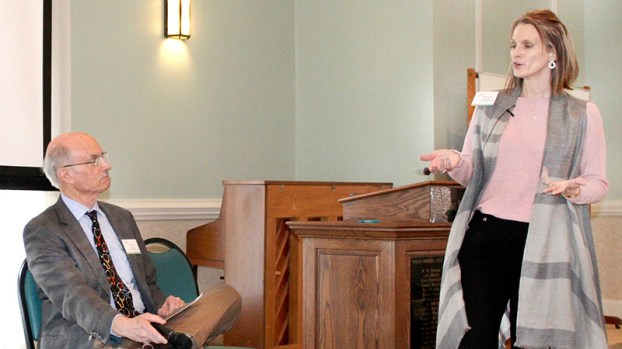 Part 1 of a series

MURFREESBORO – “Are statistics important for the work that we do?”

This was the question posed by Amber Griffiths at the beginning of her session during a recent conference centered on the opioid epidemic. The conference, held in the fellowship hall of Murfreesboro Baptist Church on Thursday, gave attendees a look at the problem of opioid use in eastern North Carolina as well as solutions people and organizations are coming up with to combat the crisis.

Griffiths, who is a board member of Dare County’s Coalition Against Substance Abuse, answered her own question by saying, “Those numbers help us secure funding dollars. Without knowing those trends and that data… we would not have federal dollars, we would not have state dollars. It helps us direct our resources more effectively. The statistics numbers are extremely important.”

Griffiths was joined by a variety of other speakers to address several different perspectives on the issue of opioid abuse. The audience was comprised of professionals throughout the northeastern region who often work with people affected by opioid use: physicians, nurses, care coordinators, pastors, mental health professionals, and more.

Opioids are drugs such as codeine, oxycodone, Vicodin, fentanyl, and heroin.

“We’ve had substances as long as we’ve had humans,” said Donnie Varnell, an investigator with the Dare County Sheriff’s Office. “Ever since the red poppy has been growing on the earth, we’ve had some version of opium.”

Varnell’s first session of the day dealt with the history of opioids and, in particular, what the drug abuse situation looks like in North Carolina. He started briefly with the Opium Wars in China in the 1800’s.

“England wanted its opium, and China had figured out that opium was killing off their population. So they outlawed opium and seized all the opium that was supposed to go to England,” he explained of the reason the war began.

As he continued, Varnell illustrated how opioid use had evolved in the United States to become a problem. This problem was exacerbated by pain clinics in the 1990’s, particularly in Florida. People could spend about $1,500 total to get about $7,000 worth of narcotics, he explained of the process. Before these pain clinics started getting shut down by the Drug Enforcement Agency (DEA), patients could pick up their prescription without having to go to a pharmacy. They’d get the pills directly from the clinic, Varnell explained, all under the watchful eyes of a man with an assault rifle.

“They did it all day, every day, at dozens and dozens of pain clinics. And we wonder why we have a pill problem in America,” the investigator remarked.

Today, he says, even though methamphetamines, alcohol, and marijuana are all popular drugs in North Carolina, prescription pills and heroin are the biggest problems.

Addictions usually start off simply by having access to the pills, either by a legal prescription or by taking them from someone close. From there, Varnell says, users start buying the pills and start increasing their dosage to get the same high as before. Eventually they continue using just to keep from feeling sick.

Many drug users turn to heroin because it’s cheaper than pills, the investigator continued, but the increased use of fentanyl mixed with heroin has caused the overdose rate to spike dramatically in recent years. 80 percent of the heroin recovered in Wilmington, Varnell reported, tests positive for fentanyl as well.

Dr. Blake Fagan, a family doctor from Ashville, echoed how dangerous fentanyl can be during his presentation.

About one gram of heroin can cause a fatal overdose, the doctor explained. In comparison, it only takes about 30 grains of fentanyl for the same result, and often users don’t know it’s even mixed with their heroin.

Recently, an elephant tranquilizer named carfentanyl has been attributed to overdose deaths as well.

“It’s 5,000 to 10,000 times more potent than heroin,” Fagan said, adding that a mere three grains of the substance will lead to death.

Since the 1980’s, he explained, prescriptions for opioids have exploded by 600 percent. Instead of using opioids only for end-of-life care and acute trauma like they had previously, medical professionals began prescribing the pills to treat chronic pain issues such as fibromyalgia, migraines, and back pain.

Pharmaceutical companies pushed the need for these prescriptions often by citing an article which appeared in the New England Journal of Medicine in 1986 as evidence supporting the use of opioids. The article claimed they were effective and not addictive.

What they neglected to mention, however, is that the “article” in the prestigious medical journal was actually a short letter to the editor. There was no peer-review or anything else done to corroborate the claim, Fagan explained.

“There’s no data that says using opioids for chronic non-cancer pain is effective. There’s absolutely zero data for doing that, and yes we’ve been doing it for the last 30 years,” he said.

The doctor emphasized throughout his presentation that opioid use causes permanent changes within the brain.

When one first starts using the pills, the short-term effects are usually positive. Pain is reduced. Motivation and confidence increase. Depression and anxiety also decrease temporarily.

But after long-term use of opioids all of those effects shift. Dopamine and endorphin levels drop. Motivation decreases. Depression gets worse. The list of side effects for opioids is also substantially longer than for other pain medication like acetaminophen.

Fagan cited studies which showed that people who took an opiate for seven days doubled their risk of going on permanent disability.

“They said it was going to decrease pain and increase function,” he noted of what the pharmaceutical industry promised. “It did the opposite.”

Fagan was also adamant that opioids have an even more devastating effect on younger people, saying “the brain under 25 [years old] should not be touching this stuff at all if possible.”

During her session, Griffiths agreed with Dr. Fagan’s statement on youth opioid use, saying “Alcohol, marijuana, prescription meds… they’re going to impact a teen brain so much differently than an adult brain.”

Every presenter cited a multitude of statistics as they spoke to the crowd.

“I may be a little flippant here, but they’re getting by,” Fagan commented.

250,000 was the number of deaths attributed to opioids in the past 20 years. Twenty percent represented the number of Americans who use substances illegally. Six-hundred million was the estimated number of individual opioid pills in North Carolina in 2016.

But despite all the numbers, there was an emphasis to remain focused on the people affected by the opioid epidemic.

Griffiths shared a childhood photo of a girl who died from an accidental prescription drug overdose before she was 16 years old. Now Griffiths works with the girl’s mother to speak in the community about the impact of that loss.

“I think you need to remember what all these statistics mean,” she said.

Next in the series: available resources to combat the problem.

GREENVILLE – Nothing ever goes as planned. For Brandon Hodges, that fact may wind up working in his favor. Hodges,... read more