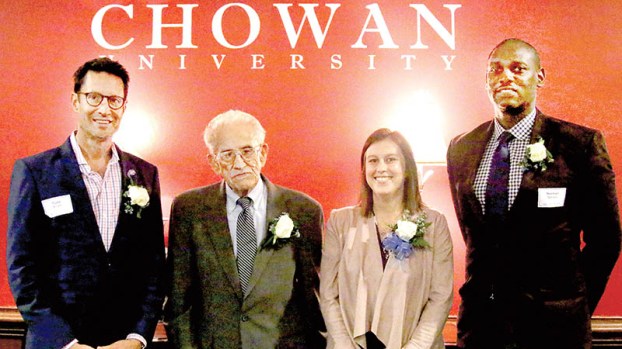 Todd Wright of Richmond, VA, is a 1984 graduate of Chowan College where he earned an associate degree in Business Administration. He was a member of the 1982-1984 Men’s Basketball team led by Chowan Hall of Fame Coach Bob Burke. Wright helped the Braves win two consecutive conference titles and become the first basketball team in Chowan’s 169-year history to win 30 games, ending the 1984 season with a 30-9 record.

Wright’s team also compiled a total of 57 wins, another record that has yet to be surpassed. Wright was a vital part of the 1984 Chowan Braves team that advanced to the NJCAA National Championships in Hutchinson, Kansas for the first time in school history.

Since leaving Chowan, Wright has built a highly regarded Commercial photography and video studio in Richmond, VA. Through his photo/video career, he has been recognized by many peer organizations and publications featuring his work. Some of Wright’s commercial clients include Seiko, Google, Walmart, Chase Bank, UPS and many other national and international brands.

Herman Spencer is a native of Plymouth, NC, and graduated from Chowan College in 2000. He was a student-athlete for four years on the men’s basketball team coached by Bob Burke, while he studied Printing Production and Imaging Technology at Chowan College.

Spencer went on to work in the fast-paced environment of the newspaper industry, starting in 2000 at The News & Observer in Raleigh, NC. Passionate about being in a competitive environment, Spencer found the newspaper industry a natural fit. He was quickly promoted to Director of Imaging at The News & Observer and continued to work his way up from there. Ultimately, he became head of a newly created department, the PreMedia Technology Division for The McClatchy Company, where he now supervises a staff that maintains and supports companywide PreMedia systems for all 30 McClatchy markets nationwide.

Allie Kolezynski is a 2012 graduate of Chowan University. The Strongsville, Ohio native earned a degree in Business Administration prior to obtaining an MBA from Cleveland State University in 2013.

Off the field, she served a three-year term on the NCAA Division II Student-Athlete Advisory Committee (SAAC), including a two-year stint as vice-chair, and went on to be a co-adviser during her time as an administrator at Chowan.

As a senior, Kolezynski was named the 2012 CIAA Woman of the Year, the highest honor bestowed on a female CIAA student-athlete. She was again recognized by the league in 2013 receiving the Commissioner’s Service Award for representing the CIAA SAAC and contribution to Chowan.

Upon graduation, Kolezynski spent four years as Assistant Athletic Director/Director of Athletic Communications at her alma mater. She earned CIAA Sports Information Director of the Year accolades in 2014 and 2016. In January 2017, Kolezynski was named Assistant Commissioner for Communications and Operations at the Mountain East Conference. She resides in Fairmont, West Virginia.

WINTON – The Hertford County Department of Social Services Board recognized Viola Benthall on December 5 with a plaque for... read more