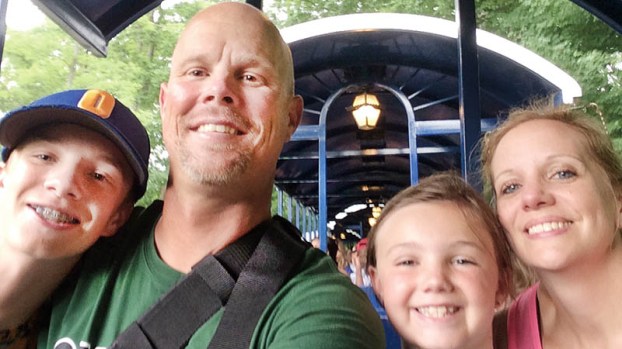 Brandon Hodges is shown with his wife, Anna, and two children, Isaac and Cali, during a family outing. Hodges, a Como native, is seeking a live kidney donor to help him overcome a medical situation he has battled since age 14.

GREENVILLE – Nothing ever goes as planned.

For Brandon Hodges, that fact may wind up working in his favor.

Hodges, a Como native and former standout baseball player at Hertford County High School where he later came back to coach before moving to Greenville, is currently battling IgA nephritis. He can survive through periodic dialysis, but only a kidney transplant can allow Hodges to live somewhat of a normal life.

IgA refers to the antibody molecule. This is a normal substance present in all of us that helps to fight infections in the throat, airways, and intestine.

In IgA nephritis, the antibody gets deposited in an abnormal way in the filter units of the kidneys. The build-up of this material damages the filtering units, allowing protein and blood to leak into the urine. Both kidneys are equally affected by this condition. This is a kidney disfunction that worsens with age.

Healthy kidneys function at between 80 and 100 percent. Right now, those vital organs are operating at between 12 to 16 percent for Hodges, meaning he’s at Stage 4, bordering on Stage 5, with this disease.

As reported in a story published in this newspaper in late November of last year, Hodges was under the care of doctors at Duke University Hospital at that time.

“Everything was running fairly smoothly as they worked to find a compatible kidney donor,” Hodges said yesterday (Friday). “Thanks to your story in the News-Herald back in November and Facebook (postings), Duke was flooded with calls from people who volunteered to be screened to see if they could donate a kidney to me.”

However, that effort took an unexpected turn.

“We hit a snag when it was discovered that Duke would not bill the potential donor’s (medical) insurance in order for my insurance to take it over,” Hodges noted, referencing the cost associated with the screening process. “I’m not upset with Duke because of that, it’s just their policy.”

That left Hodges and his wife, Anna, exploring other options.

“Word of mouth spread over my medical case,” Hodges said. “Shortly thereafter, the organ transplant team at Vidant (Medical Center) here in Greenville called Jan. 2, saying they would take me.”

And, better yet, there are funds available through Vidant to cover the medical costs incurred by the screening process.

“God is so good, isn’t he,” Hodges exclaimed. “The Lord is working, there’s no doubt about it.”

Those wishing to see if they are compatible to donate a kidney to Hodges are encouraged to contact Karen Malagrino at 252-744-3684. They are required to give the full name of the recipient – Rodney Brandon Hodges – as well as his date of birth (May 30, 1975).

Hodges said for those who contacted Duke University Hospital on his behalf to please consider going through the same process again, only this time at Vidant Medical Center.

“I’m so thankful to those who took the time to contact Duke and are now calling Vidant in their effort to help me,” Hodges said. “This means so much to me and my family.”

Hodges said calls to Vidant will be taken through Friday, Jan. 19.

“After that, the transplant team will begin the process of screening all those potential donors for the perfect match,” Hodges said. “They’re telling me I could possibly have a kidney transplant procedure before Valentine’s Day.”

In the meantime, friends and colleagues have kicked their support of Hodges and his family into high gear.

On Thursday of this week, Confection Connection of Greenville served up plates of chicken pot pie and donated 10 percent of sales towards his medical expenses.

Russell Allen, a baseball buddy from his playing days (and later) at Hertford County High School, was responsible for getting a GoFundMe page started for Hodges, one that is currently nearing the $10,000 mark.

Another fundraiser is planned for Feb. 1 at The Biscuit and The Bean, a coffee shop in Winterville. Hodges said that event will consist of a seminar detailing the important of organ donations.

“It’s all coming together, and I can’t accurately describe how this makes Anna and I feel other than to just say we’re very blessed,” Hodges remarked.

“I feel okay, health wise, but my doctor keeps stressing that I’m sick and this transplant is the only option I have if I want to live a normal life. That’s humbling in the sense of the effort underway by so many people, to include the folks over at Vidant, to make certain I live a full life and watch my kids grow up,” Hodges concluded.

He is a 1993 graduate of Hertford County High School. He coached baseball at HCHS from 2003-03 and was the head coach in his final year. After stints as a pitching coach at both Pitt Community College for two years and South Central High School (in Pitt County) for six years, Hodges returned to his native soil as a classroom teacher and head varsity baseball coach at Ridgecroft School for two years.

He is a 2009 graduate of East Carolina University with a degree in Sports Studies.

Hodges is married to his high school sweetheart (the former Anna Overton of Ahoskie) and the father of two children (Isaac, 13, and Cali, 8).