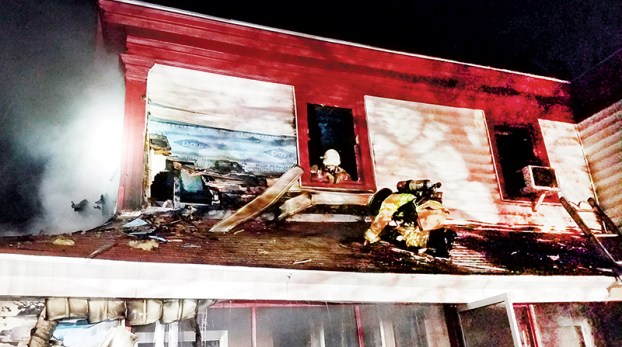 A firefighter inside a second story window waits for another to complete his ascent from the roof as they were part of nearly 40 volunteers to battle a Monday afternoon blaze at a historic home located hear Como. Contributed Photo by Hertford Co. Emergency Management

COMO – For over a century, the Evans homeplace located off Boone’s Bridge Road near here has witnessed enough local, state, national and world history to fill several books on a library shelf. 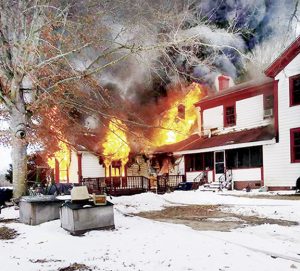 Flames consume the rear portion of the Evans home. The cause of the fire is under investigation. Contributed Photo by Hertford Co. Emergency Management

Firefighters from four departments navigated a tricky, snow-covered farm path to reach the two-story residence, now owned by another generation of the Evans family, Ed. He resided there with his wife, Teresa, and step-son, Chris.

“The rear portion of the home was fully engulfed in flames when our first units arrived on the scene,” stated Jason Howell, Chief of the Como Volunteer Fire Department. “All we could do at that point was concentrate our efforts on saving the front portion of the home.”

Howell said the front part of the residence was saved, but was damaged due to smoke and soot.

“It’s not livable the way it is right now,” Howell noted of that portion of the home. “Plus there’s a heavy odor of smoke.

“It’s sad in the fact that Mr. and Mrs. Evans had put a lot of work in making renovations to that house; it was a really nice home,” Howell added. “If it had not had been of all the help we received from the other fire departments, we would have lost the front part of the house as well. Everybody came together to help save what we could.”

“The home’s location off the main road and up a farm path made it tricky to reach, especially with all the snow still on the ground,” Howell observed. “With all the twists and turns in the path, the home is about one mile off the road.”

Then there was the issue of a few trucks getting stuck.

“Everything was okay when those trucks are loaded with water, but we had three of them to get stuck turning around in a field when they had emptied their water into our main drop tank,” Howell said.

Fortunately, no one was injured. Howell said Mrs. Evans and her son were home when the fire broke out, but both managed to safely escape. He added that when the fire erupted, Mr. Evans was in Murfreesboro purchasing items to repair a busted water pipe at the residence.

A family pet wasn’t so lucky as Howell reported that animal perished in the fire.

Howell said the cause of the fire is under investigation.

He added that the last Como unit left the scene at around 9 p.m. They returned several hours later to extinguish several hot spots.

Monday’s on-again, off-again sunshine was a welcomed sight, but not more than the temperature gauge that registered readings in the... read more