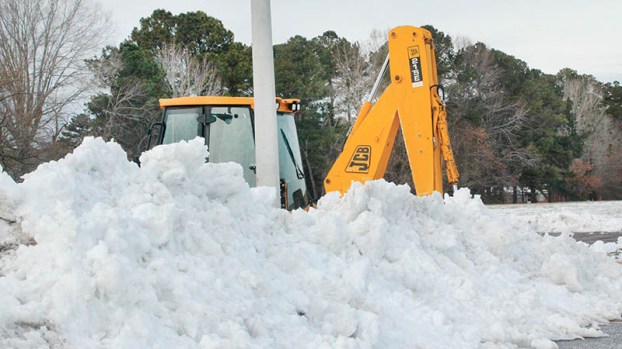 A front-end loader appears to be buried in a pile of snow in the parking lot of Ahoskie’s Pizza Inn on Monday afternoon. The snow, accompanied by nearly a week of sub-freezing temperatures, will hopefully melt this week as the local weather pattern is forecasted to return to a more seasonable variety. | Photo by Cal Bryant

Monday’s on-again, off-again sunshine was a welcomed sight, but not more than the temperature gauge that registered readings in the mid-to-upper 40’s.

After a nearly a week of sub-freezing high temperatures, not to mentioned several nights where the mercury dipped at or below zero, Roanoke-Chowan area residents are thawing out.

The coldest reported temperature over that stretch was minus 8 degrees. That came just before daybreak on Sunday morning, according to the National Weather Service’s official local station at Tri-County Airport.

Now, local residents can look forward to a stretch of more seasonable temperatures (the average high for early January is 48 degrees). The forecast calls for a high of 52 on both Tuesday and Wednesday. Overnight lows will be 28 on Tuesday and 37 on Wednesday.

Temps will soar into the mid to upper 60’s by Thursday and Friday with lows in the 50’s. Rain showers are likely both days.

“We’re accustomed to it being cold this time of the year, but not this cold,” said Hertford County Manager Loria Williams on Monday. “But we’re blessed to report there were no major incidents in our county. I, like everyone else, am so looking forward to the 60-degree days later this week.”

Hertford County local government operated with only essential personnel on Monday. Williams said county government offices will be back in full swing on Tuesday.

The only issues she reported from the cold snap was a frozen water pipe at the Hertford County Office of Aging in Winton and a problematic HVAC system at the county’s administration building, located adjacent to the new courthouse.

“The water pipe issue was scheduled to be fix on Monday. As far as the HVAC system here at the office, it was confined to one unit. It’s still under warranty and a part has been ordered to fix it,” Williams said, adding that all the HVAC systems were in full operation at the courthouse.

With a house fire near Powellsville (see story, page 1) that was a total loss as the only major emergency occurrence, Bertie County overall fared reasonably well last weekend through the weather crisis of the past two weeks. At least that’s the view of those whose duty it’s been to be at the ready all throughout this spat of icy, wintry weather.

“I’m not certain, but I believe someone said this is the coldest it’s ever been around here in history,” said Bertie Emergency Services Director Mitch Cooper.

Cooper said his office had received few calls since the snowstorm on Wednesday evening, but the main concern now is the aftermath.

“We’re concerned now with getting the ice and the snow away,” he continued. “The higher temperatures that have been predicted will help in getting us out of the freezing range, but once that’s over then we’ll have the wet and nastiness to contend with.”

Cooper said his office has mainly had to answer non-emergency calls, and that they will stand in readiness for emergency and non-emergency responses, especially at night. If any of that changed, he said it would be sometime later today (Tuesday).

“The biggest thing now is struggling with all this ice,” he noted.

Ice and icy roads was also the primary concern of Bertie County Schools (BCS) officials, from interim Superintendent Dr. Del Burns, to his newly appointed successor, Dr. Catherine Edmonds, who Burns said will be touring the county school sites all this week.

“But we’re checking all the schools to make certain,” Burns said.

He added that all public schools in the county are closed today (Tuesday) for students and an optional work day for staff.

Bertie Board of Education chairman Bobby Occena said BCS Transportation Director Wesley Dudley and Maintenance Director Matthew Bond are keeping in close contact with the Central Office to alert them of any potential threats.

“Our main concern is the ice, because we can’t run partial bus routes,” Burns stated. “Safety is our most important concern, and we have to have safe travel for our students as well as for the staff.”

Burns said factoring in on how soon the school calendar will be resumed depends on road conditions.

“Right now the side roads are ‘iffy’, that’s clear to okay; and the back roads are just plain icy,” he continued.

Occena said parking lots, driveways and sidewalks at all of the county’s elementary schools had been cleared and that clearing at Bertie High School and Bertie Middle School should be finished by late Monday. Clearing was complete at Bertie Early College High School before the weekend thanks to that site also serving as the temporary headquarters of the county’s Emergency Services.

“They needed to keep it cleared for their emergency equipment, so that helped with clearing at the school site,” Occena stated.

Sheriff John Holley said all has been quiet county-wide as far as calls to the Sheriff’s Office.

Bertie County Manager Scott Sauer said Water Department Director Ricky Spivey was checking all the towers in water districts across the county to guard against freezing, but that none had been reported as of Monday afternoon.

Sauer said reports of no heat at the Bertie-Martin Regional Jail were exaggerated.

“The (HVAC) unit was checked and serviced by (contractor) Barnhill Electrical of Williamston on Friday,” Sauer reiterated.

Over the weekend Holley said due to high volume load the system was barely pumping at times, but there had always been heat at the facility.

“Like in your homes, it (heating) is getting a very heavy workout,” Holley emphasized.

“Those metal bars and metal beds can get extremely cold,” Sauer added. “That might be behind a lot of those reports.”

Below freezing temperatures since last week have kept the snow from the winter storm lingering in Northampton County. But things are finally starting to thaw out, slowly but surely.

The biggest issue has been the road conditions. Though the DOT has worked to make the roads safe again, many still have patches of ice and snow obstructing travel.

According to Storey, the county did not see any major vehicle accidents over the weekend. There were only a few cases of cars sliding off the road, but all at low speeds, he added.

Northampton County Schools were closed again on Monday because of the road conditions. The icy secondary roads were the main concern, said Superintendent Dr. Monica Smith-Woofter, since highways were passable for school buses.

“We’re anticipating if we’re able to open [on Tuesday], it will definitely be on a delay,” she continued. “We’re trying to see how much melt we’ll have on our campuses today.”

Dr. Smith-Woofter confirmed a makeup day for Saturday, January 20 has already been scheduled, and upcoming teacher workdays will be used to make up the additional missed days.

The superintendent expressed her gratefulness for the county’s emergency management team in keeping the school system informed of weather and road conditions. She also added appreciation for working with transportation staff and other local school superintendents to make well-informed decisions about school closings.

Northampton County local government offices opened on a two-hour delay Monday with no reported issues. County Manager Kimberly Turner stated Monday morning they had not yet made a decision on when to open on Tuesday.

The county’s Wellness Center, she reported, was the only place not yet open to the public on Monday because of a busted sprinkler head. To fix the problem, they had to shut the building’s entire sprinkler system down.

Other parts of the county had to deal with additional temperature-related issues as well. Storey confirmed a power outage early Sunday morning on both ends of the county.

“We did have a couple transformers blow,” he explained. “One was over towards Murfreesboro way, and the other one was between Gaston and Garysburg. It was just pulling so much current.”

He estimated the power was restored in approximately two hours for all customers affected.

Over the weekend, the county saw a few minor fires which only affected garages and outbuildings; no homes. Storey cautioned people to keep an eye on their space heaters and not leave them unattended.

“It just gets too hot,” he said if the space heater is too close to flammable materials.

First Sgt. Rodney Sawyer with the North Carolina Highway Patrol’s Troop A/ District II office in Ahoskie said there were no major accidents despite the snow and ice-covered roads in Bertie, Gates and Hertford counties.

“The cold weather and the icy roads kept folks inside for a couple of days,” Sawyer said. “Fortunately we did not have any serious accidents. We did experience a high number of service calls for motorists that had slid off the road into a ditch or had impacted a snowdrift. It could have been a whole lot worst.

“We really appreciate the effort by DOT; they did a god job keeping the main roads open, which aided our response times as well as the response times for fire and rescue units,” Sawyer added.

Brittany Tann of Roanoke Electric Cooperative said there were a few spotty power outages over the weekend.

“Our crews were able to respond quickly and have the power restored in approximately two hours during those outages,” she said.

Tann added there were some instances where REC members reported blinking lights. She said those issues came from the electrical feed from Dominion Energy.

Bonita B. Harris, Media and Community Relations Manager with Dominion Energy, said most of the power outages were caused by the weather, trees on lines, and equipment failure.

The extreme cold was definitely a contributing factor since last Thursday. During that period, there were 39 outage projects with 853 customers served from our Ahoskie Office,” Harris stated.

On Monday afternoon, Harris noted there are currently no Dominion customers without power served from the Ahoskie office, which serves Bertie, Hertford and the eastern half of Northampton County.

“We had more than 100 line workers engaged in the restoration in North Carolina, working around the clock. Overall we were able to keep up with the demand from the cold weather,” Harris stated.

JACKSON – An arrest was made 48 hours following the alleged kidnapping and assault of a female victim. Northampton County... read more