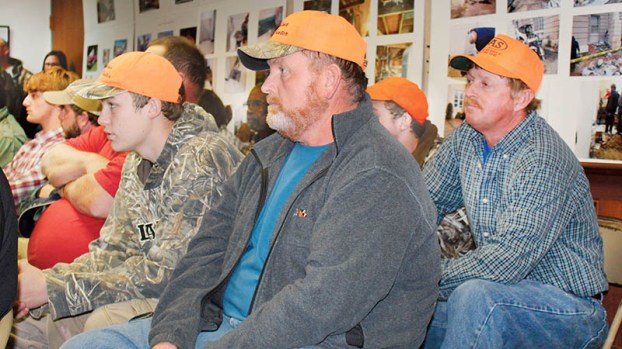 Shown here are just a few of the 40-plus hunters that filled the Bertie County Board of Commissioners meeting room on Dec. 18.

WINDSOR – The NC Wildlife Resources Commission (NCWRC) is proposing changes to the statewide deer hunting regulations for 2018-2019. Until recently, most area hunters were unaware of the proposal, or what they could do about it.

The proposed changes culminate seven years of extensive research, hunter engagement, and feedback on behalf of the Wildlife Commission.

Among the proposed Deer Regulations Changes were to modify statewide deer hunting seasons by establishing ﬁve deer season zones instead of the previous four. Essentially, the old Eastern zone was split below Bertie, Martin, Pitt, Greene, Wayne, Johnston, and Wake counties into a Southeastern zone, while the northern portion becomes the Northeastern zone. In the Northeastern zone, gun season would start on the Saturday nearest Oct. 29 and run for 10 weeks, peaking around Nov. 7 and ending the first Sunday in January. 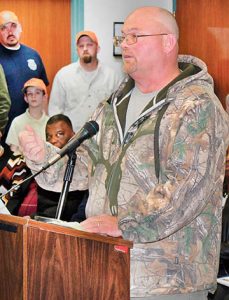 They rallied behind the voice of their spokesman – Ernie Hoggard of Askewville in opposition to a proposal to shorten the deer season in Bertie and other Roanoke-Chowan area counties.

Doe (antlerless) bag limit statewide would be set at four, and for bucks (antlered) at two.

On Dec. 18, a group of 40-plus hunters, many dressed in camouflage clothing, attended the Bertie County Commissioners meeting at the County Administration Building in Windsor to voice their concerns regarding the proposed changes.

“All the folks in the orange hats tonight, we’re all here because we’re just learning about the new law and we’re against it,” said Askewville hunter and businessman Ernie Hoggard, acting as spokesman for many in the group. “We would like there to be a public hearing on that.”

Board of Commissioners chair Ernestine Byrd Bazemore informed Hoggard the public hearings are organized by the Wildlife Commission and are not done locally.

“There are several places where they are holding the hearings, and you can also email, write, or call,” Bazemore stated. “However we are aware of this, and we are in support of the hunters here.”

Bazemore said she had instructed Bertie County Manager Scott Sauer to prepare a resolution of support from the Bertie Commissioners that local hunters could carry and present at the public hearings.

“Hunting’s a way of life for us,” acknowledged Hoggard, who runs Harrison’s, a convenience market in Askewville, formerly known as ‘Coon Dogs’. “I run a business and hunters come to my place and they buy gas, they buy supplies, and without that I would have no business.”

Commissioner Tammy Lee encouraged the hunters to go onto the NCWRC website and make their comments immediately.

“There’s going to be a (public) hearing in Edenton, and you need to be there for this,” said Commissioner John Trent. “Northampton County is also being greatly affected by this with their stores and restaurants. Losing nine days of the hunting season is what they’re (the state Wildlife Commission) proposing, but it hasn’t been enacted as law just yet. It’s just so far gone to the (NCWRC) committee, and once they vote on it and they pass it, then it goes before the legislature (General Assembly), who’ll then put it into law or they’ll amend it or stop it completely.”

Trent says he has met with an attorney to review the proposed changes and he’s learned the nine days the Northeastern deer season would lose would be going to western North Carolina.

“You’re talking about economic development that’s in full force out there,” Trent added. “We’re talking about the eco-tourism of Bertie County. I’ve talked to Cathy at Claudine’s and she told me that if we lose this time here they’re proposing then it’s really going to kill our restaurants.”

Trent went on to recognize a hunter with the Black Jack Hunting Club, located in his district; a club that’s existed since 1940.

“They hunt right next to me,” Trent added. “Like most of the gentlemen here tonight, they knew nothing about this until a few days ago. These gentlemen are against it, I’m against it, I think its a hardship it puts on Bertie, Northampton, Hertford, and also Halifax counties; and these are the four number-one hunting spots in the state of North Carolina.”

Trent said it was a travesty there would be no NCWRC-sponsored public hearings held in either of those four counties, but encouraged hunters to attend the one scheduled in Edenton.

“One thing I can assure you of is that this Board understands the impact of this on this county, and we’re against it,” echoed Commissioner Ron Wesson. “We know what hunting brings to this county in terms of jobs, revenue, and everything else. So we’re going to support you. I think what chairman Bazemore is recommending is a resolution from this board that I’m confident will be passed to show we’re against it, and to show the folks who’re making the decision know that. All those who’re against it need to be at the public hearing. They’ll hear from us, but they need to hear from you. It can make a difference.

“We’re not sitting back on this,” White stated. “Let your voice be heard.”

All the Commissioners enthusiastically encouraged the hunters to attend one of the public hearings, along with a writing campaign.

Trent then made a motion that the Bertie Commissioners draft their resolution stating the entire Board was against the proposed changes. It was seconded by White and passed unanimously.

“Read out the whole proposal – on bear, on ducks, on everything, and then let yourselves be heard,” said Lee.

Comments can also be submitted by e-mail, please include your name and address online or by mail to: Rule-making Coordinator, 1701 Mail Service Center, Raleigh, NC 27699-1701.

In 2010 the NCWRC began to evaluate deer populations along with the availability of the hunting season. In 2015 evaluations of deer herds statewide were completed and one year later (2016) surveys were conducted by the Commission of deer hunters and evaluated at county, regional, and statewide levels.

Public forums were held in 2017 to present the survey results and propose changes in the hunting season that could positively improve the condition of the deer herd and thus impact deer hunting.

The evaluation of deer herds statewide on a biological level suggested that the deer herd can be improved by reducing young buck harvest, shifting the timing of harvest later in the year and adjusting doe harvest rates. A majority of hunters who responded to the survey (81 percent) said they were willing to accept changes in deer hunting seasons to improve the quantity of the herd and 68 percent think there are too few mature bucks in North Carolina’s herd. But many of their reactions to these changes were mixed. It’s caused some individual hunters and hunting clubs to find out where their local politicians stand.

WINDSOR –After a near four month vacancy of no full-time leader at the top, the Bertie County Board of Education... read more