Charles Williford, Lieutenant Colonel, US Army, Retired, headed up the event with planning and organization and Club Pro Steve Smart organized the teams and supervised the tournament. Commander of Post 102 James Hutchinson and his Legionnaires helped sign up teams and sponsors. Funds raised by the event will be used to help the American Legion baseball program and veterans. 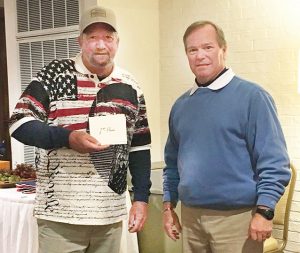 There were twenty-two teams playing in the super ball tournament. Due to cold weather the start time was delayed until 12 noon, but the teams played through the windy, cold temperatures.

Closest to the Pin winners were Ronnie Brown on Hole #5 and Jimmy Cotton on Hole #12.

All teams had at least one military veteran member.

The tournament started with a brief ceremony to honor all Veterans. Robin Bland sang the National Anthem and Steve Smart led a prayer for the players. 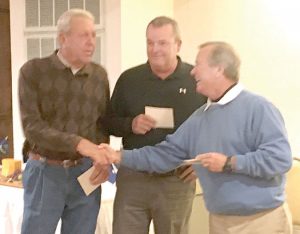 The Swamp Dragons (accepting are, from left, Cecil Alston and Tim Davis) receive the second place prize from Steve Smart.

The event ended that evening with a Veterans Day Golf Tournament Banquet to honor the tournament winners and all veterans. About 100 golfers, veterans and friends enjoyed a social time followed by a buffet dinner.

Commander Robert E. Rawls, US Navy, retired, honored the Vietnam War veterans and the veterans of the Laotian Secret War. 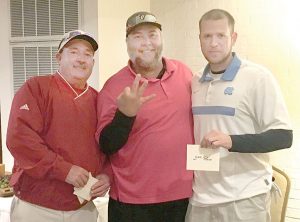 Members of the third-place team (Hutch’s Raiders) were, from left, Andy Lee, Petie Burden, and Michael Hutchinson. Not shown is John Brooks.

Lieutenant Colonel Williford said that this was a great and successful event for the first year, and he said that he expected this to be the First Annual Veterans Day Golf Tournament followed by many more.

The evening ended with Commander Hutchinson singing “God Bless America” and thanking everyone involved to include the sponsors, players, and Beechwood.