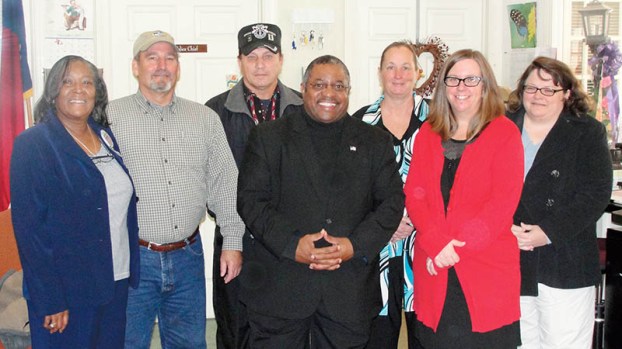 WOODLAND – Folks were greeted by a decidedly crisp autumn morning at the new Memorial Park here Saturday, The Park is located beside Town Hall at 123 East Main Street.

This event, sponsored by Woodland Community Outreach Inc. (WCO), got underway with a heartfelt welcome by Donielle McDermott, WCO chairperson. She commended everyone for braving the elements, which was followed by those gathered reciting of the Pledge of Allegiance and singing the National Anthem.

The invocation was provided by Jane V. Mann, Pastor of Immanuel House of Prayer, located in Lasker.

Town Commissioner Ron Lane performed the dedication of Woodland Memorial Park. He talked about the park’s construction. He thanked everyone who made the idea for the park a reality. 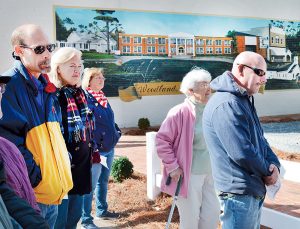 Shown here is a portion of the crowd in attendance at the dedication of Woodland’s Memorial Park and Veterans Day salute.

Engraved Memorial Bricks can be purchased to honor people who served in the military. They will be installed at the new park.

Lane pointed out the mural painted on the side of the Town Hall building.

McDermott invited everyone to go inside Town Hall for the town’s second annual Veterans Day celebration.

The guest speaker this year was SGT Eagle Eye, United States Army (Retired). Eagle Eye (Daniel England) was born October 13, 1957 in Cherokee, NC. He is a member of the Wolf Clan of the Cherokee nation. The Eastern band of the Cherokee Nation resides in Cherokee. This tribe is one of the three federally recognized Cherokee tribes.

At the tender age of 15, Eagle Eye joined the US Army.  Within six weeks after basic training he was with the 82nd Airborne Division and recruited by Special Forces and Green Beret because of his recognizable skills. Eagle Eye said he considers himself not a soldier but a warrior. He practices the old ways. In the not too distant past some Indian children were in training at a young age to be braves or warriors.

Stationed at Fort Benning, GA, Eagle Eye’s superior, 2nd Lt. Charles Baxter, was his Special Forces Commander. He served with Baxter, who rose to the rank of three-star General, for 25 years.

Being in Special Forces, Eagle Eye was often in the heat of battle and in harm’s way. He said team’s effort and loyalty to each other got missions accomplished. He was guarded about speaking of his experiences and missions. He was involved in missions in Vietnam, Panama, Grenada, Kuwait and Iraq.

He served with honor for 32 years.

Retired General Baxter is now a tribal judge in Courtland, Virginia’s Cheroenhaka Nottoway Indian Tribe. Baxter and Eagle Eye are both members and are very active in Indian affairs and functions.

During his speech, Eagle Eye did not use notes, but talked from his heart. He spoke softly saying, “We shot up the same ground serving as different branches of the military, but we did so as brothers and sisters in arms.”

One could not hear his footsteps or sense his presence unless you saw him. If he didn’t wish you to see him, you wouldn’t. These skills and stealth allowed this warrior to survive.

He concluded by mentioning Chad Stephens with Veteran Affairs in Winton and their close relationship. Veterans need to be aware of their rights and benefits.

The Roll Call of Veterans was called by McDermott and Pattie Manuel.

In his closing remarks, Woodland Mayor Kenneth Manuel thanked everyone for attending the park’s dedication and celebration to honor the Veterans who sacrificed so much for our freedom.

WOODLAND – An estimated 250 to 300 people turned out for Woodland’s first Heritage Day event, according to Town Mayor... read more