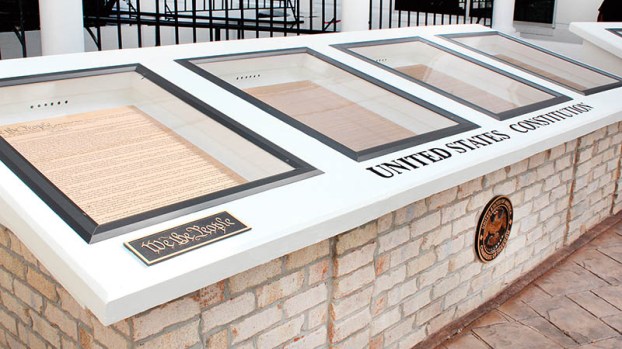 The Bertie County Courthouse grounds are the latest home for the Charters of Freedom: bronze replicas of the US Constitution, the Bill of Rights, and the Declaration of Independence for viewing under glass. The display was constructed by county personnel and private contractors over the summer. | Staff Photos by Gene Motley

WINDSOR – If America’s greatest gift is freedom, then there can never be too few reminders.

The eighth Charters of Freedom – and first in North Carolina east of the foothills – were dedicated Thursday in a special ceremony at the Bertie County Courthouse in Windsor. Replicas of the three documents considered most sacred to American freedom: the Declaration of Independence, the U.S. Constitution, and the Bill of Rights, are recreated in bronze and presented in a glass encasement for viewing by the public.

The project, which took some six months to construct, is the brainchild of Burke County businessman and Foundation Freedom founder Vance Patterson, who, along with his wife Mary Jo, visited the National Archives in Washington DC years ago because they had never seen the original documents and it was an experience Patterson called emotional.

“Seeing something our founding fathers had actually penned, and then their signatures – Je­fferson, Adams, Franklin and the others – I got goose bumps,” Patterson said before some 100-plus people crowded into the Bertie Courthouse parking lot and foyer for the dedication event. 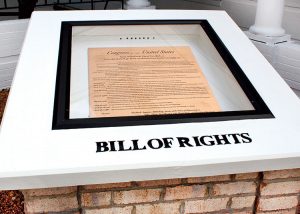 “When I saw the first page of The Constitution and the words, ‘We the People,’ I actually got a lump in my throat,” he recalled.

Patterson returned to western North Carolina and birthed the idea of re-creating those monuments, and in 2014 the first setting was dedicated in his hometown of Morganton.

Seven monuments later, they can now be viewed in Bertie County.

Ron Lewis, treasurer of Foundation Forward, Inc., the non-profit that supervises the building of the monuments, served as Master of Ceremonies. Lewis helped supervise the monument fund for the project, funded entirely with contributions, and where no taxpayer monies were used.

“Our passion is to provide easy access for all to these founding documents in a proper setting,” Lewis remarked. “Our vision is to provide access and education in all communities in the United States and our goal is to educate and preserve American history.”

Pastor Gary Cordon of Victory Temple Church opened with an invocation. Bertie High School was represented with the Marching Falcon Band and Color Guard, while Brittany Evans sang the National Anthem. Bertie County Manager Scott Sauer recognized the local dignitaries, many of whom were in attendance.

Patterson later recounted to the assembly the story of the engineering as well as the American Eagle logo that adorns the front facing of the monuments.

“If you want a monument to last, you put more underground than you do above ground,” he said. “Your foundation here is three feet thick and weighs over 38,000 pounds – over 19 tons. Each document weighs over 60 pounds. (On the logo) The eagle represents the Declaration of Independence: proud, bold, and defiant. Seven stars above the national bird represent the Articles of the Constitution, while the 10 below are for the Bill of Rights.”

Patterson said, with care, the monuments should last for 300-500 years.

“We believe this gives us a direct association with our founding fathers by helping to protect what they gave this country: a government to serve and protect ‘We the People’,” he stated.

“This is not a monument,” he reinforced. “This is a hands-on supplement to your school children’s curriculum. All our laws and government are based on these four pages. Our hope is that our future leaders will come from communities like this.”

Patterson then gifted the Charters from Foundation Forward to Bertie County Commissioners chairman John Trent via a special plaque. Trent called the addition of the monuments all part of the Courthouse renovation begun two years ago.

“Thanks should be given to all the Commissioners for making this county proud for what Bertie County now has,” remarked Trent. “This is a collision course of success because it’s been done by the people of Bertie County to make this lasting for our students and everybody who strives everyday in Bertie County.”

As the service wound down, Patterson urged the attendees to sign their names for inclusion in a time capsule located on the back side of the setting in a sealed vault. That vault will also contain letters from local veterans, school administration, and other dignitaries, along with other Bertie memorabilia. It will then be placed in the monument later this summer and to be opened Sept. 17, 2087, the 300th anniversary of the signing of the Constitution.

The combination to the vault will be given to Trent, who joked you’ll have to dig him up in 70 years to learn what the combination actually was.

WINDSOR – If you build it, they will come. The Bertie County Board of Education has indicated that one of... read more