COLERAIN – People seeking information on how to recognize PTSD and how to support those who suffer from the disorder now have an additional resource they can turn to. Become Educated on PTSD is a new book out by local advocate Melodie Poulson, Th.D.

“It’s a hidden pain,” Poulson explains about the importance of identifying the disorder.

Post Traumatic Stress Disorder (PTSD) affects people all over the world and also right here in the local area. A number of different traumatizing factors can cause people to be diagnosed with the disorder, such as military service, the death of a loved one, living through natural disasters, or assault. The severity of the condition differs from person to person. 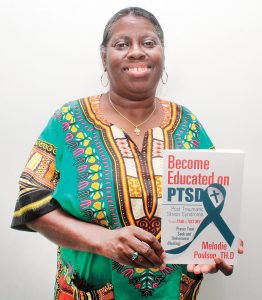 Melodie Poulson of Colerain has used life experiences within her family and elsewhere to author a book on Post Traumatic Stress Disorder. | Staff Photo by Cal Bryant

Poulson says she was inspired to write the informational book after seeing a family member deal with PTSD. While her family member was going through treatment and therapy, she says that there were not a lot of resources to teach the rest of the family how to be supportive as well.

“I wanted to be an advocate,” Poulson says.

From there, she began meeting with people in the local area to research more about living with PTSD. It involved asking a lot of questions and listening to shared insights. She was amazed by the people who opened up to tell their stories, even those she hadn’t known had been struggling with it before.

“I never knew the effect it would take,” she says of the positive response she received throughout the researching and writing process.

She also contacted the Veterans Administration in North Carolina, Virginia, and Philadelphia to get extra information, which she says turned out to be extremely helpful.

While describing the book’s purpose, Poulson, who is a member of Faith Hope and Deliverance Church in Winton and holds a doctorate in philosophy, explains that it’s written from a ministry perspective. She stresses that it’s a supplement rather than a substitute for professional therapy.

Poulson says the phrase she heard repeatedly during her interviews was “nobody took the time out to listen.” She urges that the key to understanding and support is simply listening to PTSD sufferers.

“No matter the time of day: listen,” she adds. “Be their support system.”

The book, which also contains within its pages testimonies from three different PTSD sufferers, compiles all the information Poulson gathered and offers it to affected families, so that, as Poulson says, “you can be a blessing to them” as they recover.

Become Educated on PTSD is published by Xlibris and is available for $15.99 from Barnes & Noble, Books-A-Million, and Amazon. It’s also available in ebook form. Poulson plans to work on releasing an audiobook version sometime in the future, as well as a version for children.

“I want this to be worldwide,” she explains about her desire to widen her audience simply because PTSD sufferers need help everywhere.

She encourages people to seek out as much information as possible on PTSD. One good resource she mentioned is a newsletter sent out by the Veterans Administration. It’s good to become as educated as possible, she says.

Poulson and her husband, Curtis, also help spread awareness through their nonprofit group “A Mother’s Light of Love For Each Branch.” The ‘branch’ refers to the different sources of trauma that can cause PTSD.

She doesn’t hesitate to emphasize the importance of her main point: “the keywords are listening and understanding and love and support,” she says.

But it’s probably summed up best by the phrase on the book’s front cover, an alternative meaning for the acronym PTSD: “Prayer Trust Seek and Deliverance.”