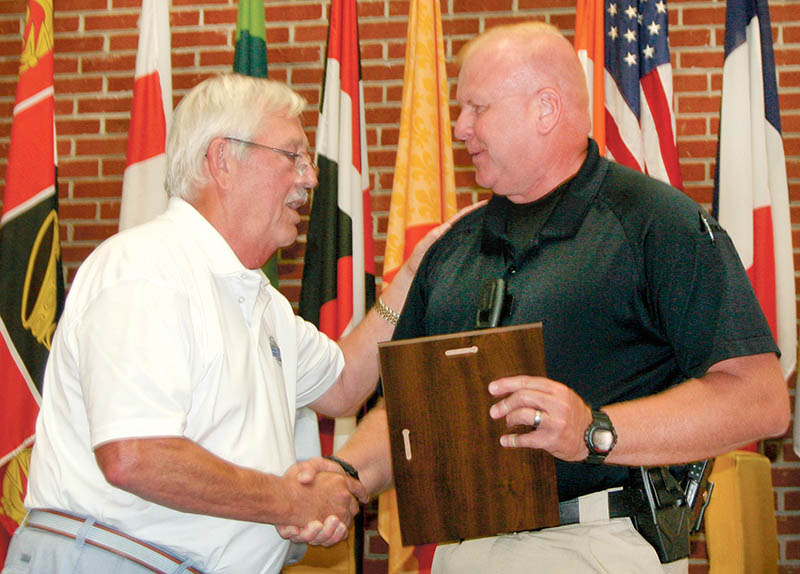 Lt. Joe Burgess (right) is congratulated by Mayor John Hinton upon receiving a retirement plaque honoring his decades of service to the Murfreesboro Police Department. | Staff Photo by Holly Taylor

MURFREESBORO – Lieutenant Joe Burgess received a plaque commemorating his time in service for the town of Murfreesboro at the regular Town Council meeting on Wednesday, June 28. Lt. Burgess is retiring from the police department following the recent retirement of former town Police Chief Darrell Rowe.

Mayor John Hinton presented the plaque and commended the long-time Murfreesboro police officer for his excellent work over the years.

“We’ve lost about 60 years of experience,” Interim Police Chief Chris Sumner said about the departure of Burgess and Rowe.

After receiving his plaque, Lt. Burgess chose to say a few brief words to the Council and other town employees and citizens in attendance.

“I want to thank everybody for this,” he said, and added well-wishes for the Town Council to continue their good work with all the hard decisions they have to make.

At the end of the meeting, each council member thanked Lt. Burgess for his service to the town. Mayor Hinton congratulated him and wished him good luck.

In other police department business, Sumner reported that they’re looking into purchasing two police cars to replace ones in need of costly repairs. The council agreed to look into funding that during their next regular meeting on July 12.