LUCAMA – As a writer, especially of the fiction/romance/suspense category, it helps to have a vivid imagination.

The Hobbsville native, now residing in Lucama, is the author of The Secrets of Rose Cliff Plantation, published by Outskirts Press, Inc.

“I was inspired to write this story while fishing on the Pamlico River one evening with my husband,” said Dean, a 1966 graduate of Gates County High School. “I spotted an old home sitting on the edge of a cliff. Everything around it was all grown up. 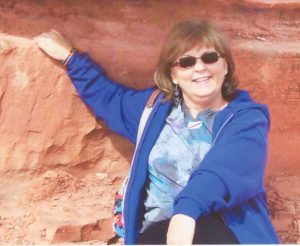 Brenda Harlow Dean, a native of Gates County, is the author of The Secrets of Rose Cliff Plantation.

“Each time we went by the place, I became more intrigued with it,” she added. “Soon the old home and my imagination got together and I found myself creating what I believe is a wonderful story. I love to read but I find that authors today don’t leave much for the reader’s own imagination, which is not the case with my book.”

Dean became intrigued by the old plantation mansion, one sitting dark and weather worn on the cliffs looking out on the river. There were no lights inside, no sounds of laughter, and no smoke coming out the chimney. Where were all the people? The windows upstairs no longer had glass panes; they were just solid black squares that seemed to say, “no one lives here any longer.” If someone walked behind this old place, they would see a graveyard now surrounded with briars and weeds. The gravestones can’t tell who is buried there because time and the wind have erased all the writing. Who were these people? Did no one care about them or this mansion?

“I have written about this mansion and plantation over a time span that goes from 2016 back 100 years,” Dean said. “All my characters invite each reader to take the journey to find the secrets of this wonderful old plantation.

“I have been told that when you finish the last page you feel the sadness of leaving the characters. That is the feeling I was trying to capture. I will tell you now that there is a second book, Rose Cliff Plantation—the secrets revealed. This had to be done because the book was too long. This second book is due out very soon,” she said.

Even though she now lives in Wilson County, Dean stated she has never forgotten her roots.

“I was very honored to have been elected by my classmates as Miss Gates County High School, an honor that I hold dear to this day,” she noted. “I then attended Chowan College which was only a two year college at the time.

“I was married to Douglas Knight and we had three wonderful sons, Jeffrey, Michael, and Brian Knight. Douglas passed away in 2008 from a long battle with cancer. I was blessed by God to become the wife of another wonderful man, James W. Dean.”

Among her joys of life, other than writing, includes walking paths in the Blue Ridge Mountains, fishing, drinking coffee on a cool morning and playing with her grandchildren.

“I have always wanted to write, but I put that passion away until my children were grown and on their own,” Dean remarked. “Now I have the time and desire.”

The Secrets of Rose Cliff Plantation is a paperback available worldwide on book retailer websites such as Amazon and Barnes & Noble for a suggested retail price of $14.95. The webpage at www.outskirtspress.com/thesecretsofrosecliffplantation was launched simultaneously with the book’s publication.

Additionally, The Secrets of Rose Cliff Plantation can be ordered by retailers or wholesalers for the maximum trade discount price set by the author in quantities of ten or more from the Outskirts Press Direct bookstore at www.outskirtspress.com/bookstore