Born December 27, 1930, in Jackson, NC to James Carter and Pauline (Lassiter) Warrick, he was the last of his six siblings to pass. Upon graduation from Jackson High School in 1950, he continued to help his parents run their small peanut farm in Northampton County. He followed his younger brother Bobby by joining the 82nd Airborne Division in 1953, stationed at Fort Bragg; he was a paratrooper for two years. 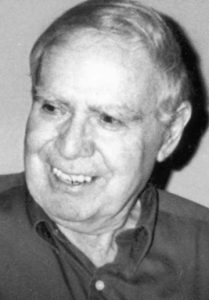 David was a 1959 graduate of North Carolina State University with a Bachelor of Science degree in agricultural education. He served as a NC Agricultural Extension agent in Carteret County in Beaufort for three years and in Alexander County in Taylorsville for eight years.

David moved his family to Asheboro, NC and joined First Baptist Church in 1974, where he taught third grade Sunday school class and received the certificate of Ordination as Deacon in 1976. He owned Warrick’s Plant and Garden Center in Asheboro for several years.

David was an early recycling man, not necessarily for the environmental aspects, but as a result of how he was raised. His family was blessed to learn many valuable lessons during his 86 years: never throw away old pantyhose — use them to tie up tomato plants; when you leave a room – turn off the light; you can always put on an extra layer of clothes if the house is too cold; even if you are meeting a dog, always be on time — let the dog be late; save bread ties — uses are endless; and empty milk jugs …let’s just say David found ingenious ways to use them. Napkins were his canvas of choice for his thoughts, notes and future intentions. He had a solution for problems with weeds, grass or bugs. David enjoyed assisting people with their gardening needs and answering questions related to growing household plants, gardening and farming. He shared his blueberries, strawberries and other produce with neighbors and enjoyed being busy outdoors.

David loved and was proud of his four girls. He made sure they could change their own oil and drive a tractor before they went out on their own. He enjoyed watching his grandchildren in sports and local plays – they made him laugh, and he did the same for them. David was resourceful and inventive. He almost got himself killed, more than once, on his Massey Ferguson tractor. Thankfully, God saw fit to let his family continue to have him. His endearing term for his girls was ‘Puddin’. They will miss how only he could say it.

David is survived by a son, Steve Summers of Live Oak, FL and his nine grandchildren; daughters, Wanda C. Warrick of Greensboro, Pam W. Cochran and husband Ron and two sons Owen and Nathan of High Point, Dawn W. Greene and husband Ray and two sons Jackson and Nicholas of Asheboro, and Holly W. McRoy and husband Donald and children Lydia and Landry of Asheboro.

The family will have a private memorial gathering in Asheboro.

At a later date, the family will travel to Jackson, NC to the Warrick family cemetery.