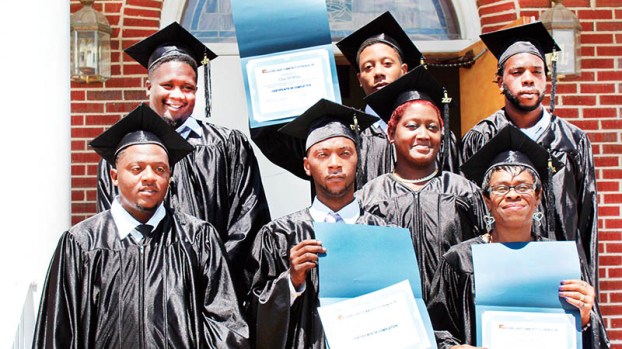 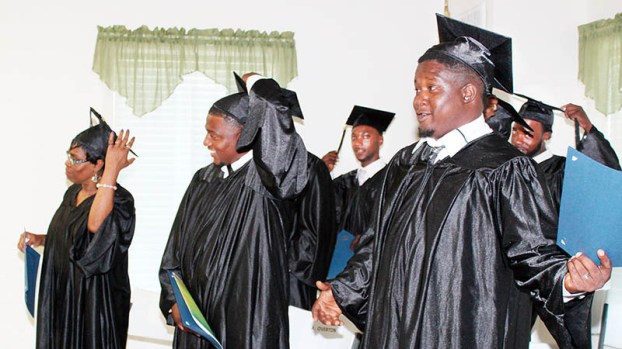 The graduates celebrate the end of their 90-day course by turning their tassels.

MURFREESBORO – Clad in their cap and gowns, the first graduating class from the MRT program in Gates and Chowan counties proudly received their certificates. The seven graduates gathered in the fellowship hall of First Baptist Church in Murfreesboro surrounded by friends and family on Saturday, June 24 to celebrate the completion of the course.

MRT, which is short for Moral Reconation Therapy, is a Cognitive Behavioral Intervention (CBI) program designed to reduce the chance of criminal offenders returning to prison by increasing their moral reasoning. The 90-day course, which is funded through the Department of Public Safety’s Recidivism Reduction Services, helps instill positive identity formation, assess current relationships, and develop better decision-making skills.

According to information provided by the Department of Public Safety: “CBI is based on the simple principle that thinking (internal behavior) controls overt actions (external behavior). Through CBI programs, individuals learn new skills and new ways of thinking that can lead to changes in their behavior and actions.”

Recidivism Reduction Services, which is currently provided to 97 counties across the state, additionally provides substance abuse treatment, educational resources, and employment assistance among many more resources.

Loving Light Community Outreach (LLCO), a faith-based organization located in Murfreesboro, is contracted with the Department of Public Safety to provide the MRT courses for Gates and Chowan counties.

“This is not a funeral,” said LLCO program manager Dee Copeland as the graduation ceremony got underway. “We are celebrating!”

Near the beginning of the event, Kathy Artis, a retired educational administrator from Hertford County Public Schools, serenaded the graduates with a song including the lyrics “I just can’t give up now, I’ve come too far from where I started” to remind them all not to quit now that they’ve finished the program.

There were two keynote speakers for the event: State Senator Erica Smith-Ingram and the Department of Public Safety’s Community Development Specialist Tiffany Vaughan.

Senator Smith-Ingram delivered a biblical message to the graduates, urging them to read the story of Paul in Acts chapters 26 through 28. The story tells of how Paul suffered through a shipwreck and many other hardships but he never gave up hope and finally arrived at his destination.

“Don’t take your hands off of God because He won’t take His hands off of you,” Smith-Ingram said. “God has brought you a mighty long way.”

She concluded her speech with congratulations to the graduates and the wish that God would continue to bless them.

“Today is a day of celebration,” said Vaughan in the opening words of her own speech that followed the senator’s.

Vaughan sprinkled her address to the graduates with quotes from Dr. Seuss’ book Oh, the Places You’ll Go! while also talking about the “boundless opportunity” they all have now that the program is complete.

“Regardless of what happened, you got through it,” she said. “I’m proud of you.”

The seven graduates also had the opportunity to address their friends and families who had gathered in support for the event. Many spoke of their reluctance to join the MRT program at first, but were ultimately glad they did. They spoke of changes they could see in their lives since going through the program.

“I’ve been learning how to escape my own prison,” said Donte Jackson, thanking everyone for their encouragement as he learned how to make different choices.

Fellow graduate Timothy White echoed that sentiment, saying “this class has shown me a better route.”

LLCO Lead Consultant Dennis Stephenson spoke after the graduates had received their certificates.

“You have people here who believe in you,” Stephenson emphasized.

Copeland also added a few final words to the students she’d worked with the past few months.

“We’re so grateful to see young men and women taking a step toward the future,” she said, and adding that this re-entry program is a good way to restore families and communities.

The ceremony concluded with the graduates turning the tassels on their caps, signifying that they’re starting a new chapter of their lives.