AHOSKIE – Estella Hall Simons celebrated her 100th birthday on June 10 at the Ahoskie Inn surrounded by family, friends, and well-wishers.

A retired educator with Bertie County Schools for over 25 years, Simons was born in 1917, one of 11 children to the late James and Maggie Hall of Merry Hill. She attended John P. Law Elementary School in Merry Hill and later C.G. White High School in Powellsville where she was valedictorian of her class in 1936. 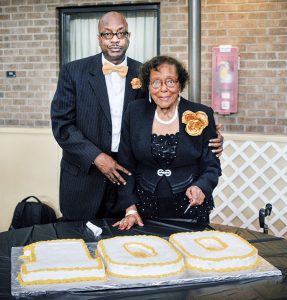 Estella Simons is joined by her youngest son, Anthony, at a June 10 celebration of her 100th birthday. | Photo by Joan McCullough

Hoping to be the first of her siblings to graduate from college, Simons received scholarship offers from Hampton University (nee Institute) in Virginia and Shaw University in Raleigh. When the time came though, she decided to marry the love of her life, Willie Simons, and together, they bore four children- Jean, Willie, Ervin, and Anthony.

When Simons became a substitute teacher in the local public schools, she still longed to further her education.

“I knew I should have gone to college like my daddy wanted me to,” she would often remark, to which her husband would reply, “If you want to go to college, I can send you just as well as your daddy could have”.

He only had to say that a few times before it became a reality.

In 1951, Simons enrolled in Elizabeth City State Teachers College in Elizabeth City. While affiliated with the Mu Honor Society, in 1953 she was one of the first members of the ECSTC on-campus chapter of Delta Sigma Theta Sorority.

Following her graduation in 1955, Simons returned to her alma mater and began teaching at C.G. White High School where she remained on the faculty there until 1968. That year, with the desegregation on Bertie County schools, she was transferred to what was then Bertie Junior High School (now Bertie Early College High School) in Windsor and remained there until her retirement in 1982.

Simons’ past leadership positions include: President of the local Association of Classroom Teachers; president of District ACT; treasurer of the NC Association of Educators; secretary of Ahoskie Alumnae Chapter of Delta Sigma Theta Sorority, Incorporated; Dgt. Ruler and Vice Dgt. Ruler of Eureka Temple #521, IBPOEW; and for over 30 years as Education Director for IBPOEW.

Simons say she also enjoys passing time with her word search puzzles. However, she is known to enjoy nothing more than casting her fishing line in the nearest pond or river.

Simons says if there were a passage of scripture that would best describe her it would be Proverbs 31:30 and 31 – which states that: ‘charm is deceptive, and beauty is fleeting; but a woman who fears the LORD is to be praised. Honor her for all that her hands have done, and let her works bring her praise at the city gate’.