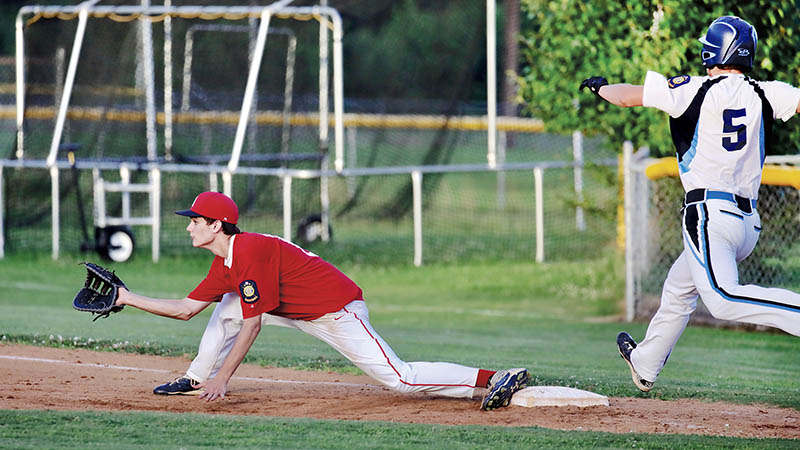 Ahoskie Junior Legion first baseman Edward Bradley stretches for a throw as an Albemarle runner races towards the bag. This action came Friday night where the locals dropped a one-run loss in extra innings. | Photos by William Anthony Photography

Ahoskie opens the scoring with one run in the bottom of the first. Ryan Rowe and Hunter Mitchell are both hit by pitches. Trent Hobbs pinch runs for Mitchell. Hobbs goes to third on a wild pitch and scores on a Spencer Simonowich sacrifice fly. Ahoskie leads 1-0 after one inning.

The Braves score one run in the bottom of the second. Jordan Robinson walks and steals second. Robinson steals third and scores on an error on the play. Ahoskie leads 2-0 after two innings. 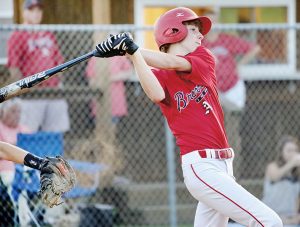 Evan Lassiter takes a big swing at a pitch for the Ahoskie Junior Legion team in their game vs. Albemarle.

Albemarle scores three runs in the top of the third. Ahoskie scores two run in the bottom of the third on a Trevor Lee 2-run homer to center. Ahoskie leads 4-3 after three innings.

Ahoskie adds two runs in the bottom of the fourth on a Rowe RBI double and a Simonowich RBI groundout. Ahoskie leads 6-3 after four innings.

Albemarle scores three runs in the top of the seventh to tie the game at 8-8 after seven innings, to force extra innings.

Albemarle scores the winning run in the top of the eighth. Ahoskie does not score in the bottom of the eighth for the 9-8 final.

Ahoskie dropped a doubleheader at Cary on Saturday by the scores of 9-2 and 11-1.

Ahoskie is 7-9 overall and 4-5 in the conference and will play Edenton at home Tuesday (tonight) at 7 p.m. They will play Bear Grass at home Wednesday at 7 p.m.