RALEIGH – Much of the Charter School Advisory Board meeting held June 13 was taken up by a discussion of Heritage Collegiate Leadership Academy, a Bertie County charter school that has come before the board previously due to academic, financial, and governance issues.

Following a presentation and questioning of school representatives, members of the board were so dismayed at the state of the school that they considered revoking the school’s license on the spot. A motion to do that failed 6-to-4.

Finally, the board voted 9-to-1 to allow the school to keep operating into next year with a set of stipulations which, if not met, would lead to initiation of revocation of the school’s charter next December. 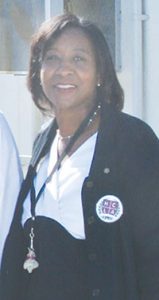 Kashi Bazemore Hall is the founder of Heritage Collegiate Leadership Academy, based in Windsor. | File Photo

The school’s problems were discussed extensively by the board. The school opened in 2014 and was labeled as low performing by the state in 2015 and 2016. On at least three occasions, the school missed deadlines to submit a required audit to the state.

Alexis Schauss, the Department of Public Instruction director of school business, described the finances of the school as very lean, noting that at the end of 2016 their fund balance was a little over $5,000.

“They are very much on the edge of significant deficits,” she said.

Schauss also said that the ratio of teachers at the school versus other personnel seemed out of balance in comparison to other similar schools. Heritage has about 65 people on its payroll.

“For a school of 300 students, it did seem like they had a large number of non-certified personnel,” she said, adding that the money for salaries could be better spent in the classroom.

At issue for many of the board members was the inability of the leaders of the school to meet deadlines. For instance, the advisory board had asked the school for a variety of documents in advance of the meeting. But those documents only came in last night, leaving board members very little time to absorb them.

At one point in the meeting, Kashi Hall, founding director of the school, was asked for the projected average daily membership for next year. She responded by saying that those figures were not due until the end of the month.

Board members then notified her that they were, in fact, due June 12, something they said Hall had been told about.

“You all notoriously miss things,” board member Cheryl Turner told Hall. “Was there anybody else here who didn’t know that was due yesterday?”

Nepotism was another issue addressed by members. Hall said that her father, mother, and twin sister were employed in some capacity by the school. Hall blamed the school’s problems with nepotism on the fact that only about 10 percent of the Bertie County population is educated.

“That 10 percent is going to be my family on two sides,” she said.

After the motion was made to immediately revoke the school’s charter, the board had a passionate debate on what to do, with some board members urging immediate action while others said it would not be feasible to close the school down so quickly.

Board vice chair Steven Walker said the school had ample notice of the materials it needed to provide for the June 13 meeting.

He also said he wondered at the level of rigor being taught in the school while noting that the academic performance of the school was not good and its governance was a “disaster.”

“I think we are throwing the taxpayers money down the drain to continue to give this school money,” Walker said.

Board member Eric Sanchez said the school leaders did themselves no favors with the way they answered the board’s inquiries.

“It’s been embarrassing to hear the answers,” he said.

At various points in the meeting, Hall defended herself. She revealed to the board several times that she had a disability and that the school hired an executive assistant to help her stay on top of things.

“I am a good leader,” she said. “Do I have struggles and things that I’m dealing with? Yes, I do.”

Twice during the meeting, the advisory board moved into closed session to discuss the school with legal counsel.

After the motion to immediately revoke the school’s charter failed, board chair Alex Quigley began discussing the set of stipulations he thought needed to be placed on the school.

Those stipulations include that the school needs to complete its reporting requirements on deadline and needs to either add more board members to its governing board to meet statutory requirements or dissolve its board. The school must also submit monthly budgetary and financial data, meet with the charter school advisory board two more times, and reconcile its payroll information so that it is clear how many employees it actually has, as opposed to the number listed in its payroll. He also said that the Office of Charter Schools should make at least two unannounced visits to the school before December.

“If they don’t meet…these stipulations, we’re going to move into immediate revocations in December of next year,” Quigley said, adding that the advisory board could choose to do that earlier if they felt it was necessary.

If the Charter School Advisory Board decides to initiate revocation of a charter, the matter goes before the State Board of Education for a final vote.

Alex Granados is a researcher and legislative reporter for EducationNC. He grew up in Raleigh where he attended Jeffreys Grove Elementary School, Leesville Road Middle School and Cardinal Gibbons Catholic High School. Alex graduated from the University of North Carolina at Chapel Hill with a degree in journalism in 2005. While in college, he worked for The Daily Tar Heel, the UNC student newspaper, and he interned for The State of Things on WUNC-FM. Contact him at agranados@ednc.org or @agranadoster