NAGS HEAD – Jenny Beecher Cooke Jenkins of Nags Head, North Carolina and formerly of “The Cabin,” in Aulander, North Carolina, died on June 20, 2017 at Sentara Hospital, Norfolk, Virginia after a brief illness. She was the wife of Joseph Henry Jenkins and they would have celebrated their 50th wedding anniversary on June 24, 2017.

She was born in Aulander and was the daughter of the late Oliver Beecher Cooke and Jessie Mae Dunning Cooke. Her grandparents were Mr. and Mrs. John Cooke and Mr. and Mrs. Godwin Dunning, all of Aulander. 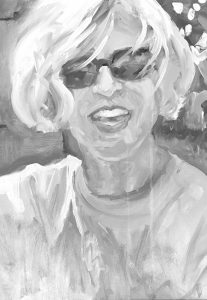 Jenny was a gifted painter who was involved in many civic organizations and charitable causes in Dare County and the Roanoke-Chowan area. She enjoyed playing tennis, jogging, skiing, singing and entertaining. Her big “porch party” in Nags Head was a tradition during the Labor Day weekends. She and her husband traveled extensively, spending winters in Puerto Vallarta, Mexico.

Mrs. Jenkins was a member of St. Thomas Episcopal Church, Ahoskie, North Carolina and attended St. Andrews by the Sea Episcopal Church, Nags Head. A long-standing member of the Friends of Historic Hope, she was chair of the ball at the Hope Plantation, celebrating the bicentennial of our country in 1976. Jenny also enjoyed dedicating time to both the Bertie County and Dare County Arts Councils.

Believing in higher education, Jenny and Joe Henry are generous supporters of the University of North Carolina and Chowan University. She remained a Tar Heel fan most of her life. Go Heels!

In addition to her parents and grandparents, she was preceded in death by her sister, Mary Ann Cooke Rowe and her beloved feline friend, Michelle.

A memorial service will be held on Thursday, June 22, 2017, at 11:00 a.m. at St. Thomas Episcopal Church, Ahoskie. The Rev. Jeff Douglas will be officiating. Friends are invited to join the family in the Parish Hall following the service.