JACKSON – The public gathered at Northampton County’s Cultural and Wellness Center in Jackson on Wednesday, June 14 to ask questions and get more information about a new proposed boating access and shooting range in the works.

The project, sponsored by the North Carolina Wildlife Resources Commission (NCWRC), will be located on property outside of Jackson donated by the Department of Public Safety near Odom Prison. The boating access area will be on the Roanoke River.

“It would fill a large access gap,” said Gary Gardner, an engineering section chief for NCWRC, as he talked about the purpose of the project.

Gardner explained that this boating access area would be about halfway in between two existing access areas on the Roanoke River. Currently there is a boat ramp in Weldon and another one on Highway 258 between Rich Square and Scotland Neck. 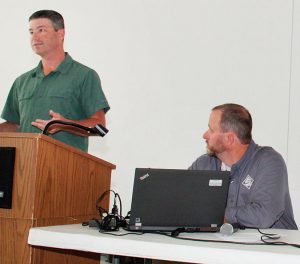 Bryan Dick (at podium) explains the outcome of a sound study that was part of Wednesday’s presentation in Jackson regarding a proposed boat ramp and shooting range. Seated is Gary Gardner with the NC Wildlife Resources Commission. | Staff Photo by Holly Taylor

The new boating access would be built on an already existing but abandoned site previously used by Odom Prison. The proposed plan includes a two lane ramp, courtesy docks, and approximately 40 parking spaces. There will be ADA compliant parking and access at the site as well.

During Gardner’s presentation, he also explained the reasons behind the proposed shooting range. He cited NCWRC’s goal for people to have closer access from their homes to shooting ranges across the state. Ranges provide safe, controlled, and organized access for sportsmen and recreational shooters, in addition to reducing litter and harm to the habitat and environment. It also provides opportunity for people with disabilities to enjoy shooting as well.

The proposed range will have shelters and will accommodate left or right-handed shooters. The plan includes a 100 yard rifle range, a 20 yard pistol range, and a 50 yard rifle/pistol range. Their goal is to have the shooting range be manned to prevent problems.

The shooting range plan also includes adding an access road off of Chapel Hill Church Road to reach the site.

“Vegetation eats up a lot of sound,” Dick explained.

Their initial study was conducted in October 2016 when cotton was still in the field and the leaves were still on the trees. Because of this, they returned in January of 2017 to study the “worst case” scenario when there would be a greater lack of vegetation.

Their study consisted of two different test sites, each over a mile away from the proposed shooting range and next to the nearest houses.

“The noise levels [from the guns] were a lot less than traffic passing by,” he said of the study’s results. “This was a really noisy site.”

Even though the sound study results were positive, the proposed shooting range will still include a variety of sound-reducing methods, so the site shouldn’t be an annoyance for anyone nearby.

General consensus among people attending the informational session was in favor of the idea.

When asked about the timeframe for the project, Gardner said that they’ll ask for final approval from the NC Wildlife Resources Commission on July 26. After that, they’ll start the process, and they hope to break ground next year. Constructing the sites should only take about six months.

Erik Christofferson, also of the NCWRC, said he was glad they were able to partner with the Department of Public Safety to get the land, and that NC House Representative Michael Wray had been very helpful as well to get the project moving.

“We’re excited to be able to provide the opportunity for shooting and water access,” said Christofferson. “They’ve been wanting these facilities for a long time.”

Dick Collier of the Northampton Chamber of Commerce said they had been trying to get boating access in the area since 1998.

“We’re real pleased with what they said,” Collier said after the meeting. “This plan fits perfectly for Northampton.”