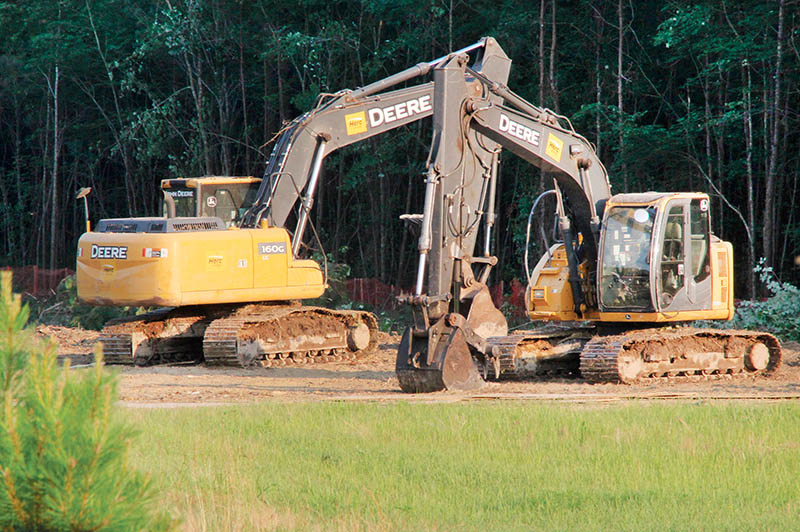 A contractor hired by Dominion Resources is currently working to move electrical lines and service poles to make way for the planned interchange at the old NC 11 and 11 intersection. | Staff Photo by Cal Bryant

WINTON – A $13.6 million highway project in Hertford County is in the works.

Hertford County Commissioner Johnnie Ray Farmer made that news known publically here last week at a meeting of the board.

Farmer said the North Carolina Department of Transportation plans to reopen the infamous “11 and 11” intersection outside of Ahoskie. The east side of that intersection was closed in 2010 due to a high volume of motor vehicle accidents. According to numbers kept by NCDOT, in the 20 years prior to that intersection being closed on one side, there were 140 accidents; 120 of those were angle crashes (a t-bone accident where a vehicle pulling out is struck by another traveling along the main line). During that same time period there were six fatalities and 242 injuries.

“DOT plans to have a bridge constructed over that intersection (carrying traffic east and west),” said Farmer, who also has a seat on the Peanut Belt Rural Planning Organization, an advisory council that gives suggestions and receives feedback from NCDOT regarding highway projects.

“There will be on-off ramps in order for traffic (on NC 11) to access the Murfreesboro highway (part of NC 11) as well as the Shortcut Road that drivers use to access US 13 back to Ahoskie,” Farmer noted.

He added that a “flyover” bridge is also a part of the project, one that will carry traffic on Modlin Road over NC 11. However, there will not be any entrance-exit ramps for those using Modlin Road to access NC 11.

“The real good news is that the contract for this project is scheduled to be let very soon,” Farmer stated.

Scott Emory, Resident Engineer for NCDOT’s Division One District office in Ahoskie, confirmed the information Farmer shared with the board of commissioners. Emory said the project (R-5311A) will be funded from two revenue streams – $10.88 million in federal funds and $2.72 million from the state’s coffers.

“This project will benefit from funds set aside for road safety,” Emory said earlier this week.

Emory added that the contract will be let on June 20. He expects construction to begin during the latter part of August and take 12-to-18 months to complete.

Farmer also mentioned other NCDOT projects now in the planning process for Hertford County. He expressed delight over the fact that Nucor Road is scheduled to receive a significant upgrade.

“That particular road will be widened and strengthened due to all the heavy truck traffic rolling in and out of the (Nucor) steel mill,” Farmer said.

Additionally, Farmer mentioned the plans to add Interstate 87 to the list of eastern North Carolina roads. That highway will serve as a route between Raleigh and Norfolk, VA. However, instead of building a major new highway that would run north and east (from the Raleigh end) between the two cities, Interstate 87 will follow two existing, four-lane routes.

“The folks in Raleigh are pushing this; they want it to follow US 64 from Raleigh to Williamston and then US 17 from Williamston, through Windsor, Edenton and Elizabeth City on to the Virginia line and end in Norfolk,” Farmer stressed. “Our problem with this planned Interstate is it bypasses us; as bad as we need four-lane roads to attract industry.”