GATESVILLE – Ashley Talton and William Leary, rising juniors at Gates County High School, have been selected to attend The North Carolina School of Science and Mathematics in Durham.

Ashley is the daughter of John and Julia Talton of Corapeake. William is the son of William and Rebecca Leary of Murfreesboro.

NCSSM is the nation’s first public residential high school that focuses on the intensive study of science, mathematics, engineering and technology. The school accepts rising juniors from across North Carolina and enrolls them through their senior year. Though 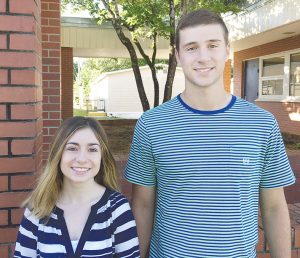 NCSSM is a public school, enrollment is limited, and applicants undergo a highly competitive review process prior to admission.  NCSSM opened in September 1980 with 150 students. The school now has an enrollment of approximately 680 students from across the state, equally representing each congressional district.

Since its inception, NCSSM has been fully funded by the state, meaning no student is required to pay any tuition, room, board or other student fees. The North Carolina School of Science and Mathematics has become a model of schools around the world and has expanded its offerings through an online program and distance offerings for schools and educators.  NCSSM is a founding member of the National Consortium for Specialized Secondary Schools of Mathematics, Science and Technology (NCSSSMST) and a constituent institution of The University of North Carolina system.

To receive a diploma from NCSSM, students must meet graduation requirements that include, but are not limited to, pre-calculus and mathematical modeling; advanced biology; chemistry and physics; a nationally recognized humanities program; and mastery of a foreign language at an intermediate level or higher.

Gates County High School congratulates each of these students on their accomplishments and wishes them well as they move forward with their educational pursuits.

Talton and Leary will begin their studies at NCSSM in August.