Born in Cairo, West Virginia, Edna was a native of Ritchie County, West Virginia, the wife of the late Richard Lee Hammel and the daughter of Wheeler Jones and Thelma Gribble Jones, both deceased. 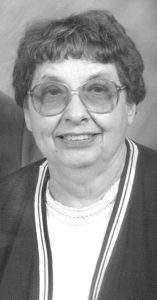 She and Richard restored and operated the Winbourne House Bed and Breakfast in Murfreesboro, NC for many years and were members of the Murfreesboro Historic Association, where she volunteered and was loved for her Hot Fudge Cakes and Turkey Bar-B-Q served at the North Carolina Watermelon Festival. She was also a member of Murfreesboro United Methodist Church where she was an active member in Keanagers and made prayer shawls. An avid reader and baker, she enjoyed traveling the United States, the South Pacific, and Europe, and always had a story to tell.

Survivors include three children, Christine Operario and husband Bernie of Kaui, Hawaii, Lee Hammel and wife Jan of Charlotte, North Carolina, and Cathy Schroeder of Mineral, Virginia; five grandchildren, Giyan, Moriah, Monica, Mark, and Kristin; two great grandchildren, Alexander and Leopold; and her sister in law, Mary Hammel of Chesapeake, Virginia. She was preceded in death by her brother, Junior Jones, and her son in law, Charles Schroeder.

She will buried with her husband, Richard, who was interred with honors in Arlington National Cemetery, on a date yet to be determined.

Rich & Thompson Funeral and Cremation Service in Burlington is assisting the family.

Condolences may be offered at www.richandthompson.com.