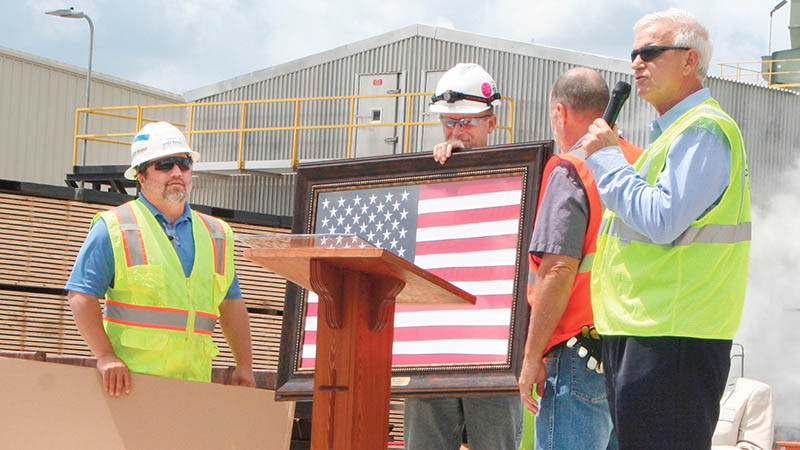 Charles Moniotte (right) of Kiln Drying Systems addresses the crowd last week at which time a framed American flag was presented to Chip Warren (with back to camera), Mill Manager of the West Fraser plant in Seaboard. The local facility recently completed a major upgrade | Staff Photo by Holly Taylor

SEABOARD – West Fraser Mill held a ribbon cutting on Wednesday, June 7 to celebrate the completion of a new kiln project at the Seaboard lumber facility. Mill employees gathered together with county officials and town representatives to mark the occasion.

“It’s an exciting time to be a part of West Fraser,” said Mill Manager Chip Warren in his opening remarks to the crowd.

West Fraser, a company that originally began in a small Canadian town in British Columbia, is now one of the largest lumber producers in North America. The Seaboard location, with support from the town and Northampton County officials, upgraded their facility by taking their batch kilns out of use and then installing new continuous direct fired kilns, or CDK for short.

The work was done by Kiln Drying Systems (KDS), a company located near Asheville. They made an effort to use local labor to help with the installation of the new kilns.

“These folks did a great job,” said KDS’s Charles Moniotte as he spoke of the successful completion of the project.

Sean McLaren, Vice President of West Fraser’s US Lumber Operations, highly praised the Seaboard mill and its employees for their hard work over the years, even during tough economic times, including the housing market downturn in 2008. Thanks to innovative measures and leadership, he said, the company has continued to flourish and expand.

McLaren also thanked Northampton County and the Economic Development office for their willingness to collaborate on the project.

“We look forward to West Fraser’s continuing success in Northampton,” said County Commissioner Robert Carter, who added that West Fraser, one of the county’s key industrial employers, has really set the standard in the area.

Other county commissioners in attendance at the ribbon cutting ceremony were Fannie Greene, Chester Deloatch, and Charles Tyner.

Northampton’s Director of Economic Development Gary Brown worked closely with the company during the project to make sure they had the resources necessary to complete it.

“This kiln project is a great example of West Fraser’s value as a great corporate citizen of Northampton County and North Carolina,” said Brown.

“Measured either on Main Street or Wall Street, the industrial sector, particularly manufacturing, drives economic growth and success. That activity is what adds value.”

“West Fraser has invested in very talented and productive employees,” he continued. “The company’s management is top-notch. And they continually reinvest in maintaining their leadership position in the North American lumber industry.”

The symbolic ribbon cutting was simply one way to mark the company’s determination to keep moving forward.