ATLANTA, GA  – The National Society of High School Scholars (NSHSS) announced that Lawrence Academy student Lauren Faith-Rae Baker has been selected to become a member of the esteemed organization.

The daughter of Neil and Pam Baker of Windsor, Lauren is a published author at the age of 15.  “God’s Girl: Living for a Purpose” is available online at Amazon and Barnes and Noble. 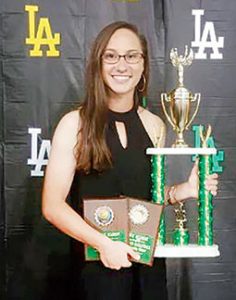 Lauren is a member of the National Society of High School Scholars, National BETA Club, FCA (Fellowship of Christian Athletes), SADD (Students Against Drunk Driving), Hugh O’Brian Leadership Runner Up, and is an All State Performer in two sports.

The Society recognizes top scholars who have demonstrated outstanding leadership, scholarship and community commitment. The announcement was made by NSHSS Founder and Chairman Claes Nobel, senior member of the family that established the Nobel

“On behalf of NSHSS, I am honored to recognize the hard work, sacrifice and commitment that Lauren has demonstrated to achieve this exceptional level of academic excellence,” said Nobel. “Lauren is now a member of a unique community of scholars — a community that represents our very best hope for the future.”

“We are proud to provide lifetime membership to young scholars to support their growth and development,” stated NSHSS President James W. Lewis. “We aim to help students like Lauren build on their academic success by connecting them with unique learning experiences and resources to help prepare them for college and meaningful careers.”

NSHSS members automatically become lifetime members at the time of their initial membership. At each step along the way – from high school to college to career – NSHSS connects outstanding young scholars with the resources they need to develop their strengths and pursue their passions.

Formed in 2002 by James W. Lewis and Claes Nobel, senior member of the family that established the Nobel Prizes, The National Society of High School Scholars recognizes academic excellence at the high school level and helps to advance the goals and aspirations of high-achieving millennials through unique learning experiences, scholarships, internships, international study and peer networks. Currently there are more than 1,000,000 Society members in 160 countries.