CHOCOWINITY – Windsor Post 37 scored single runs in the first inning and the last inning for a 2-1 win over Beaufort County Post 15.

The last run, however, came in extra innings after Beaufort County tied the game in the bottom of the seventh.

Wood Trowell came on in relief of Trenton White and is credited with the win. He gave up a walk and a hit, but no runs in the bottom of the eighth; striking out the final two batters with the bases loaded. 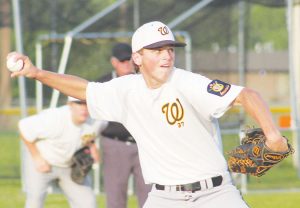 Wood Trowell, shown here pitching in an earlier game, came on in relief and was credited with the win as Windsor’s Junior Legion team rallied for a late run to edge Beaufort County Post 15 by a 2-1 finale. | Staff Photo / Gene Motley

“Talk about pressure, that’s as tight as it gets,” said Windsor coach Bobby Harmon. “Wood and Trenton were battery-mates the entire game, so the switch in the last inning was just natural. This was a big win for us.”

The Rebels got the first run of the game in the top of the first inning when White got a one-out base-hit to centerfield. He then stole second base and advanced to third when Alden Cottle singled to left field and went to second on the same play, putting two runners in scoring position.

White scored on the next play, a Trowell groundout for an RBI, and a 1-0 Windsor lead.

From there, it was a pitching duel between White and Cody Medlin over the next six innings. White eventually surrendered the tying run, but not before striking out eight batters and only walking one. Modlin gave up eight hits with one walk and three strikeouts.

In the bottom of the sixth, White’s defense came through with runners on the corners when one runner was caught stealing, and White got out of a jam with a strikeout for the third out.

However, Jeremiah Moore led off with a home run in the bottom of the seventh to tie the game before White sat down the next three in order.

In the top of the eighth, White got a one-out base-hit and stole second. He scored the winning run on Trowell’s double to centerfield for what was then a 2-1 lead. But after he and catcher Trowell switched, the pair made the one run hold up for Post 37’s fourth win in a row and third straight conference victory.

White and Caleb Damo were both 3-for-4 for six of Post 37’s eight hits. Cottle and Trowell had the other two hits, one each. Trowell also drove in two runs.

The Rebels had their streak broken at Ahoskie in a Memorial Day game, and were off until facing Perquimans in a game last night (Wednesday) that ended after press-time. They are scheduled to face Edenton Post 40 at home in Windsor on Friday.