Post 39 won by a score of 18-8 in game-one, but had to fight off an Ahoskie comeback in the nightcap, before claiming a 9-8 win.

With Ahoskie trailing 2-1, Pitt County scored seven runs in the top of the second inning off starter Jarrett Harrell and reliever Nathan Rowe to take a 9-1 lead headed into the bottom of the frame. In that half-inning, Ahoskie pushed five runs across the plate to only trail by three after two, 9-6. 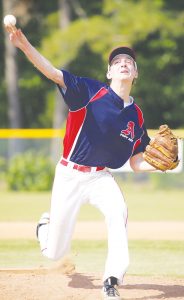 Post 39 then broke it open in the top of the fifth to build a 12-run lead before Ahoskie scored two runs in the bottom of the frame, but it was not enough to avoid a run-ruled five-inning loss by 10 runs, 18-8.

Ahoskie had six hits; two by Jordan Brinkley, including a two-run home run. Harrell also had two hits while D.J. Smith and Scoop Hoggard had one hit each.

Harrell, Rowe, and Braxton Newsome all pitched for Post 102.

In the nightcap, Pitt County completed the doubleheader sweep, but only won this time by a single run.

Ahoskie scored four runs in the top of the seventh and got the tying run in scoring position with the go-ahead run on first base, but a groundout ended their comeback threat.

Ahoskie had nine hits, led by Ron Olsen with three. Slade Cowan had two hits, while Chuck Lee, Harrell, Brinkley, and Smith had one hit apiece.

Ahoskie remained winless on the young season at 0-3, both overall and in conference. Next up for Post 102 is a non-conference doubleheader with Garner Post-1 at Louisburg College Sunday at 1 p.m.