WELDON – On May 31, Halifax Community College (HCC) hosted the graduation for the 51st class of Basic Law Enforcement Training (BLET).

The graduation ceremony was the final step in a 16-week journey. Seven cadets completed the program, making themselves full officers in five different police and sheriff offices.

The speaker for the evening was E.A. Bryant, Jr., the Uniform Division Captain of the Roanoke Rapids Police Department. During his address to the graduates, Bryant discussed the importance of training and the necessity to watch out for each other.

We are more than officers, we are family,” Bryant said. “And, as you go out and join the family, remember to ‘watch your six,’ and know that your brothers in arms are watching you also.” 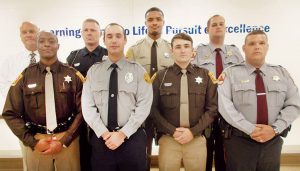 In addition to the speaker, several awards were presented for outstanding success in the program. Shaun Geldert received the Academic Excellence award for having the highest academic average in the class. James Shelburne received the Class President, Top Gun, Physical Fitness & Top Driver awards. These awards show the person that had the highest time in the firearms, physical fitness and driving training elements of the program. In addition, Shelburne was selected as the class president for his demonstrated character and commitment to the program.

Marcus Morris received the School Director’s Award, presented by Gregory Parker, the director of the BLET program. This award goes to the person who showed loyalty, determination and a positive attitude throughout the class.

Dr. Michael Elam, president of HCC, also spoke directly to the graduates and their families, reminding them of the sacrifices they have made. Afterward, Elam demonstrated his pride in the graduates, congratulating each one individually and thanking them for their decision to serve.

“I am proud of the accomplishments of these seven young graduates from the 51st class of our Basic Law Enforcement Program (BLET).” Elam said. “I am confident that these new officers have been well prepared to serve and protect our community. My confidence rests in the high quality and caliber of instructors and leadership associated with the program. You can be sure that I am dedicated to ensuring that the Halifax Community College BLET program continues to strive to be innovative, proactive, and current.”

As part of Elam’s commitment, the police and sheriff offices in the area are being included in a long-term discussion about the future of BLET training. With the success of the officers in the 2017 graduating class, as well as many others, a discussion began about in-service training, providing graduates even more opportunities for advancement and bringing them back to HCC for more work with their instructors.

The seven graduates, listed with their sponsoring agencies, are as follows: