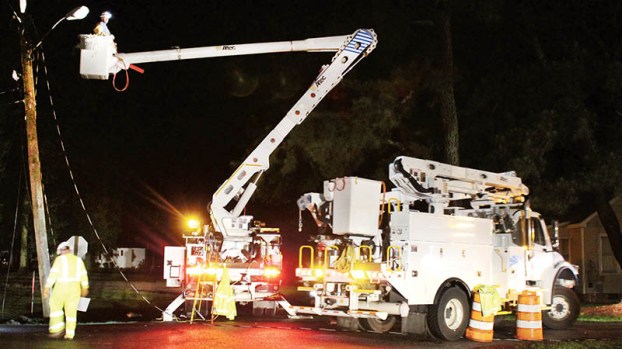 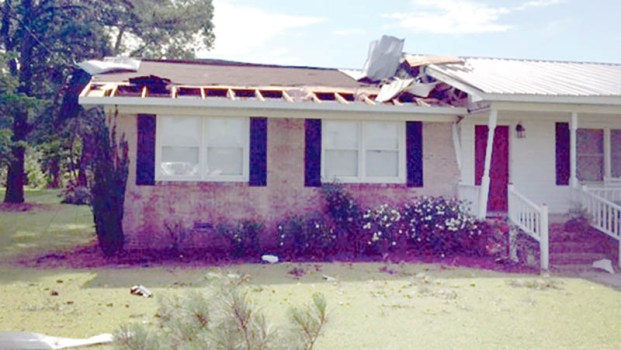 A portion of the roof of this home rented by Angela Bazemore on Cedar Landing Road in Bertie County was ripped off by Monday’s severe storm. | Photo courtesy of Bertie EM

WINDSOR – Angela “Tina” Bazemore White considers this a test of her strength, and of her faith.

White and her family, who had already lost all their possessions during last year’s Hurricane Matthew, suffered the pain of loss once again Monday night.  That’s when the vicious storm of rain and wind that ravaged eastern North Carolina hit White’s rented home on Cedar Landing Road, just south of Windsor, tearing a huge hole in the roof letting in torrents of rain.

Cooper said the storm was not a tornado, but the National Weather Service has been contacted and will make an assessment of the weather conditions at the time, as well as the damage, once they arrive in Bertie County.

The NWS team had not released any updated information as of Wednesday. 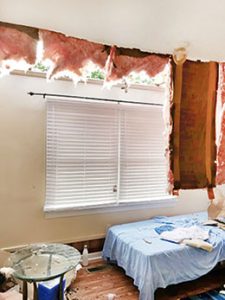 The inside of the home below the damaged roof. | Photo courtesy of Bertie EM

As for White, a mother of two who had recently married, her family lost everything last October when their single-wide mobile home at 104 Edgewood Ave., off US 13 North of Windsor, was flooded by the rising waters of the Cashie River following Hurricane Matthew.

After short stays in a both a motel and a shelter, White was able to find lodging thanks to a relative who rented her a home, a wood-panel and brick structure, located at 347 Cedar Landing Road.

White said that Monday she was at work a little before 4 p.m. when her teenage son, Shaquan, called her to say the entire house was shaking.  Within minutes, a huge wind gust – possibly a downdraft – had taken away a portion of the roof of the dwelling and rain was began to pour in.

The homeowner was alerted, and she arrived at the location a short time later along with Bertie County Emergency Services and the Bertie County Sheriff’s Office.

“This is the first time I’ve lost everything,” White said, speaking from her temporary Red Cross location at Ahoskie’s Tomahawk Motel. “The first time (Tropical Storm Julia) it just messed up some of the ductwork underneath the house, but this time we lost everything.”

White says despite the challenge she’s facing, she hopes to turn it into an opportunity.

“It’s taken a lot of praying,” she noted, “a whole lot of that. It’s a stressful time because I was just about to get situated and now I’ll have to start all over again.”

Despite the damage to her trailer last year, White says she was able to find a buyer for the flooded-out dwelling, and that has enabled her to purchase a small tract of land on which she will place a new trailer.  She says she hopes to complete electrical work shortly and then go through inspection.

White says she feels especially blessed about Monday’s circumstances because Shaquan is usually in the bedroom that suffered the damage playing his video games.

“I just thank God he was in the bathroom and jumped into the tub when the house started shaking,” she said.

The Monday storm also toppled a large tree onto power lines near the corner of Wynn Street and Snow Avenue in Powellsville causing a nearly five-hour power outage within approximately a five-mile radius of the town.

Work crews with Dominion-North Carolina Power worked from near 7 p.m. when the outage was first reported until power was restored later nearly at midnight.

So far, these were the only storm-related damages reported in the Bertie County area.