A special ceremony in his honor will be held at Center Court, Becker Village Mall in Roanoke Rapids at 11 a.m. on Saturday, June 10. This ceremony is free to the public.

Elijah was born to William Bynum Williams and Avis Katherleen Dickens Williams on March 4, 1931 in Halifax County. He spent his pre-military years farming while living in the Garysburg area of Northampton County. 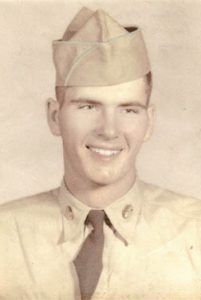 Elijah entered the military in June of 1951 as a member of the U.S. Army. He was attached to Company I, 15th Infantry Regiment, Third Division and was assigned to combat duty in Korea, where he participated in the “Battle of Bloody Angle”.

On April 5, 1952, Elijah was wounded while in battle in North Korea near Hill 317. As a result of his wounds, he was awarded the Purple Heart.

A mere four months later on August 15, 1952, Elijah found himself risking his life for three of his wounded comrades. He exposed himself to enemy fire while moving a machine gun to a more favorable position. He then delivered accurate and deadly machine gun fire on the enemy, inflicting heavy casualties. Williams then made several trips across the fire-swept terrain to aid his fellow soldiers and move the wounded men to a more suitable position for them to receive medical attention. For these actions, Corporal Elijah L. Williams was awarded the Bronze Star Medal on April 23, 1953.

A display in his honor will be at the RVVM entrance during the entire month of June.