WENDELL – Windsor Post-37 jumped on Clayton Post-71 early in the second game and with the 14-1 win completed a sweep here of a Sunday double-header on May 21.

Jarrett Burden got out of a first-inning jam thanks to his defense, then the team’s offense, led by Caleb Damo driving in three runs, went on to plaster the Harnett County team and sent the Rebels over the .500 mark in wins.

“I loved the way we put pressure on them right from the start,” said Rebels coach Bobby Harmon. “We hit all the way through the lineup.  Jarrett made some good pitches to get out of the first inning jam and then really settled in.  The sweep made it a good day for the Rebels.” 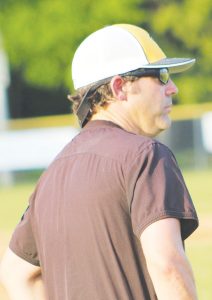 Despite loading the bases twice, a double-play and a play at the plate kept things scoreless for Clayton in the top of the first.

Windsor, playing as the home team in the bottom of the first, put up a five-spot. A base hit and back-to-back walks loaded the bases before Caleb Damo singled to score two runs. Brandon Ball then ripped one over the shortstop’s head to score a third run; and after a put-out, Ayden Harmon’s base-hit scored two more for a 5-0 Windsor lead after one complete inning of baseball.

In the bottom of the second, Windsor sent 14 men to the plate and eight of them scored, all with two-outs. Damo, Lane Slachta, Burden, Josh Morris, Trenton White, and Evan Wells all drove in runs, with Alden Cottle driving in two. The score was 13-0 before the final out ended the inning.

Clayton got a run in the top of the fourth that made it 13-1, but Windsor scored a final run in their half of the fourth when Wood Trowell doubled in Zeb Askew and the 13-run margin led to a run-rule five-inning victory for the Rebels.

Windsor (4-2, 3-1, conf.) saw their four-game streak snapped by Ahoskie Post 102 on May 29.  They resume action tomorrow (Wednesday) at home at Bertie High Field against Perquimans.  Game time is set for 6 p.m.

CHOCOWINITY – Ahoskie Post-102 broke open a tight 4-4 game with a five run fourth inning and went on to... read more