Earlier, 6-2 Greenville Pope John Paul II center Sydnee Neal inked a grant-in-aid with the Hawks.  Neal averaged a double-double of 17.1 points and 11.1 rebounds per contest during her senior season and scored over 650 points and over 350 rebounds during her career on the varsity squad. 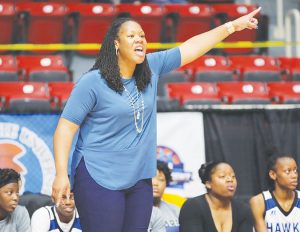 Humes is a three-star recruit (ESPN) that helped the Lady Eagles to back-to-back Final Fours in the Georgia State playoffs including an 18-8 finish during her junior season.

“I am very pleased to have Alyssa as a part of the Chowan family,” said Jones. “She comes from a great high school program and has experienced success.  She brings great size, nice scoring touch around the rim, and a presence defensively.  Her high character, great academics, and great personality will benefit our team’s future success.”

Carter stepped up during her senior season being named Second Team All-Conference after averaging 12 points per game as she helped her Thomas Jefferson High School team see their win total improve by three games compared to her junior season.

“Takiyah brings size, athleticism, and the work ethic that will help propel our guard position.  Her range and speed will continue the upward trend in our system, and she’s also a great student that has excelled academically.  Her competitive nature and great personality will be a direct benefit to the team’s success.

The Chowan women will look to build off their 17-10 campaign in 2017 where they went 17-10 overall and swept the season series against NCAA Division-II finalist Virginia Union.

WENDELL – Windsor Post-37 jumped on Clayton Post-71 early in the second game and with the 14-1 win completed a... read more