WENDELL – Ahoskie Post 102 and Clayton Post 71 split a weekend junior American Legion baseball doubleheader here Saturday afternoon with Clayton getting a shutout in the first game, 5-0, while the Braves captured the second contest in the twin-bill, 9-3.

Clayton got all the scoring they would need in game-one in the third inning when they scored three runs.  They later tacked on two more to complete the 5-0 victory, which was a conference game for both teams.

Post 102 was held to three hits in the loss.  Trevor Lee, Trent Hobbs, and Evan Lassiter had one hit each.

Things fared better for the Ahoskie Braves in game-two as Post 102 came out on top in the non-conference contest, 9-3, to gain a split. 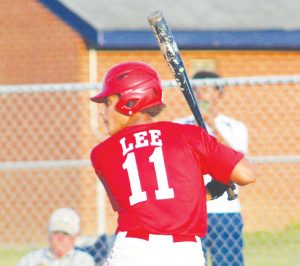 Ahoskie’s Trevor Lee had a hit Saturday for Post 102’s junior American Legion team as the Braves split with Clayton 5-0 and 9-3 in a pair of games in Wendell. | Staff Photo / Gene Motley

Clayton opened the scoring with a run in the top of the first inning.  Ahoskie answered in the bottom of the frame with a run on a Steven Futrell RBI single to knot the game at 1-1 after just one inning of baseball.

Ahoskie broke the game open with five runs in the bottom of the third.  Trent Hobbs, Derious Boone, and Futrell all contributed with RBI singles, and two more runs scored on wild pitches.  Ahoskie led it 6-1 after three.

Clayton halved their deficit in the top of the fourth inning with a pair of runs to make it a 6-3 game.

Ahoskie, however, put it away for good in the bottom of the fourth with the game’s final three runs.  Alden Lassiter and Futrell had RBI singles for the first two runs, and the final run scored on a wild pitch.  The Braves led 9-3 after the fourth.

Junior Legion doubleheaders are just five innings, and after Clayton failed to score in the top of the fifth, Ahoskie had picked up its fourth win in its last five games.

Alden Lassiter, Hobbs, Bradley, and Williams all pitched for Ahoskie and Hobbs was credited with the win on the mound.

“We didn’t come out ready to play in the first game, which ended up being a conference loss,” said Ahoskie coach David Ellis. “We bounced back to win the second game and gain a split.”

Ahoskie cracked the .500 mark for the first time this young season, upping their overall record to 4-3, and 1-2 in league play.  Following a home game with Perquimans last night (Monday) that did not end by press-time, the juniors will play Wilson at home Sunday in a double-header beginning at 3 p.m., with the first game being a conference game.