HERTFORD – The Hertford Pirates got their Junior American Legion baseball season off to a winning start here May 19.  Unfortunately, it came at the expense of the Windsor Rebels.

The Perquimans nine won 13-1, collecting four runs in the second inning and nine more in the fourth for a run-rule shortened five-inning victory.

“I thought Perquimans really swung the bats well,” said Windsor coach Bobby Harmon. “It wasn’t so much what we didn’t do, but a credit to how good they were offensively.  We have some few things to correct, but I saw some good things for it being our first game.” 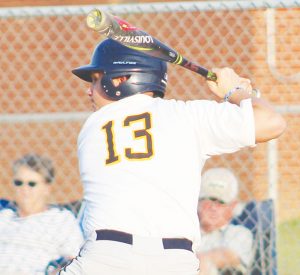 Windsor opened aggressively in the top of the first inning as Alden Cottle drew a two-out walk, stole second, and moved to third on Caleb Damo’s single to centerfield. However, Damo was caught stealing, killing an early scoring threat.

Meanwhile, the Pirates sent nine batters to the plate in the bottom of the second and posted four runs.

Windsor got on the board in the top of the third. Trenton White doubled to left field, was sacrificed to third, and scored on Cottle’s double to left. Cottle later went to third on a passed ball, but a pop-up and a fly-out ended Post 37’s chance to score more.  They trailed after two-and-a-half, 4-1.

Windsor threatened again in the fourth when Aydan Harmon walked and went to second on a base-hit by White, but a fly out left both runners stranded.

Cottle, who started on the mound, was chased in the fourth when Perquimans exploded for nine runs.  14 men graced the batter’s box and eight of the first nine of those crossed the plate.  Jarrett Burden relieved Cottle and gave up four more runs.  Despite Cottle opening the fifth with a double, the Pirates got the next three in order for the dozen-run victory.

Windsor has since gone 3-2 in Legion games and will play the same Pirates this Wednesday (June 7) at 6 p.m. at Bertie High School field.